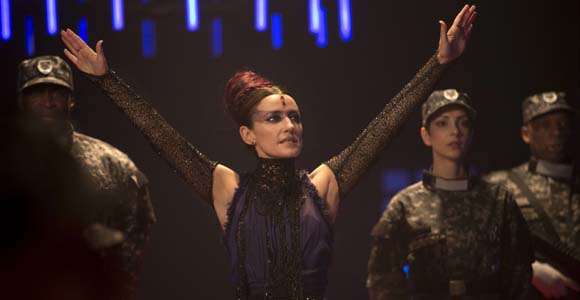 We were previously told “someone from the Doctor’s past” would have a starring role in the Doctor Who Christmas special. The possibilities of who that could be had us very excited but now showrunner Steven Moffat has narrowed it down a bit. Plus, he previewed how Matt Smith’s regeneration will differ from David Tennant’s.

Orla Brady will be playing said character, who is also described as having the plot of the episode revolve around her. Fans were quick to guess (and hope) Brady’s character would turn out to be Jenny, The Rani, or even Romana. We shouldn’t have gotten our hopes up. After all, Moffat is the one who previously said of Romana pre-50th anniversary, “I have actually given no thought at all to Romana…The Time Lords are dead in my mind. They died.”

Anyway, in the latest issue of Doctor Who Magazine he clarified this comments on Brady’s character, “The Doctor meets an old friend. Someone from his distant past. Someone who knows him very well, but whom we have never met. She’s the Mother Superious of the Papal Mainframe.”

So she’s an entirely new character to viewers but not the Doctor. Brady herself told Den of Geek, “there is a twist, it’s as Steven Moffat said, she’s a descendant of humans, there’s a grandmother or a great-grandmother who was from elsewhere, a touch of something else in her.”

Meanwhile, although Moffat is confusing everyone each time he opens his mouth about regeneration numbers, we at least know the tone of the upcoming Smith to Peter Capaldi change. He told SFX magazine regeneration “would feel not like death, but something quite mortifying,” adding, “I think that’s what contemplating regeneration must be like for the Doctor. So there’s an element of that, but because it was played that way the last time we wouldn’t play it the same way this time – that would just be wrong.”

So we don’t know exactly what it will be like but we know it won’t be the same, sad goodbye as Tennant. Though he did say there would be a lot of humor, at least early on, in the Christmas special.