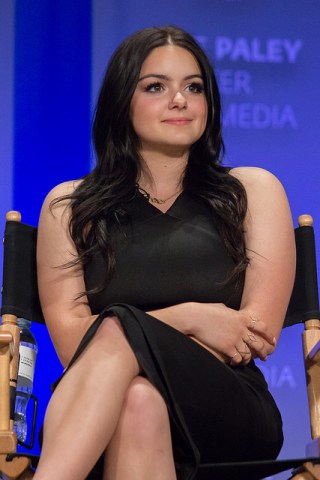 It’s not easy being a woman in Hollywood. It’s even harder when you’re a 15 year old on one of America’s most popular comedies and you’ve been “blessed” with an F cup. Such was the case for Modern Family‘s Ariel Winter, now 17, who recently underwent a breast reduction surgery. In an interview with People Magazine, she talks about the difficulties of being objectified at a young age and the physical and emotional pain that led to her decision.

It made me feel really uncomfortable, because as women in the industry, we are totally oversexualized and treated like objects. Every article that has to do with me on a red carpet had to do with ‘Ariel Winter’s Crazy Cleavage!’ or ‘Ariel Winter Shows Huge Boobs at an Event!’ That’s all people would recognize me by – not, ‘Oh, she does great work on Modern Family.’

This makes me crazy with rage, because the girl was 15 years old when she started receiving this treatment while starring on Modern Family! Fifteen. It’s bad enough that she probably had to deal with catcallers and such the way most women do in their regular lives, but the fact that it was amplified by media outlets is truly disheartening.

We live in a day and age where everything you do is ridiculed. The Internet bullies are awful. I could post a photo where I feel good, and 500 people will comment about how fat I am and that I am disgusting.

So, people will comment on a child’s breast size in a lecherous way, but then also call her fat because they’re too big? *sigh*

Winter on sharing her story:

I didn’t want to not tell anybody and then have another million stories [say], ‘What happened to Ariel? She looks so different.’ And I also think there’s some good that can come from [telling] my story. It’s something that I did to better my life and better my health, and I think that can benefit a lot of young girls. I have felt happier with myself than I ever have.

I think it’s brave and wonderful that Winter is talking about this publicly, and I hope that she encourages other young people to think about what’s important with regard to achievement and how that should have nothing to do with what your body looks like. Even in Hollywood.