Let’s Look at the Modern Era of Sherlock Holmes 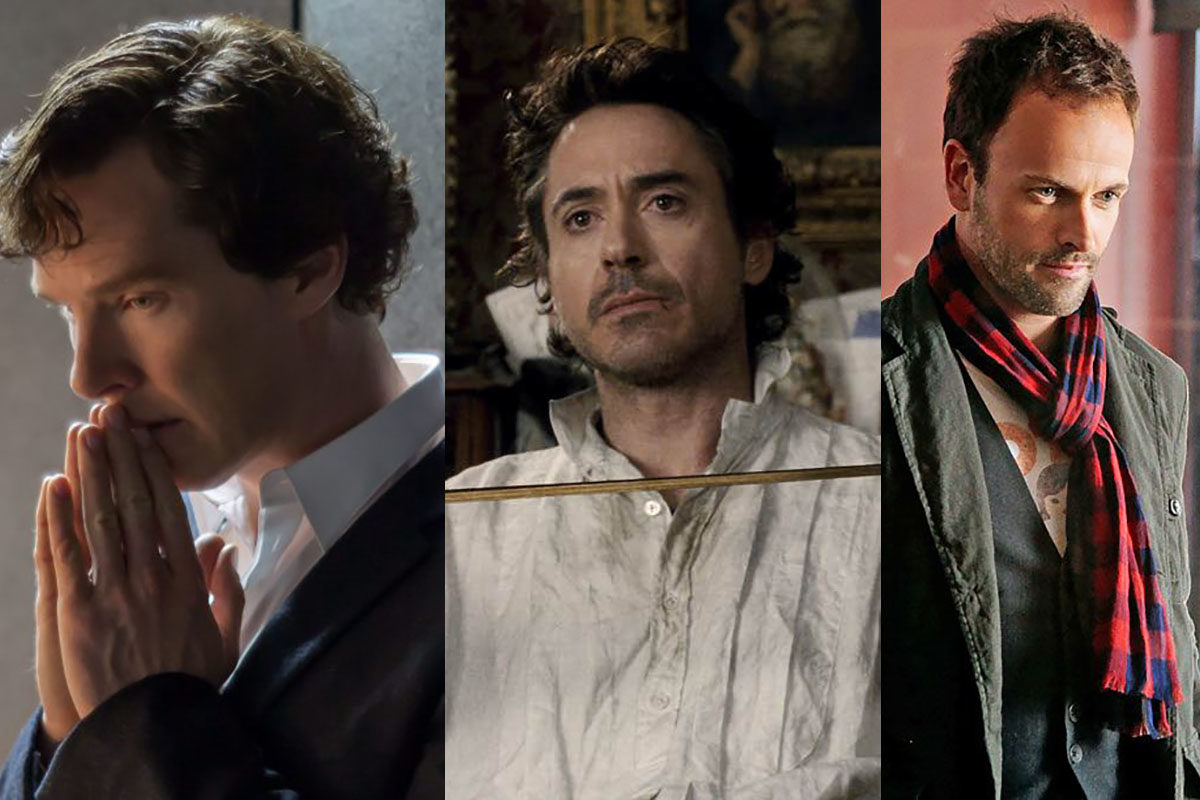 It’s 2019 and it is no surprise that we still love a good Sherlock Holmes story. Many of us grew up reading the work of Sir Arthur Conan Doyle, so we have very vocal opinions on the character and how he is often portrayed in our pop culture. This, however, is not about actorly portrayals. If that was the case, I’d probably say I’m a fun mix of all three of the modern Sherlocks; all of the actors are excellent. From Benedict Cumberbatch and Jonny Lee Miller to the film version with Robert Downey Jr., we’re going to look at the new era for how Sherlock Holmes is depicted and why some things work and some do not.

I want to focus on the vehicle in which we tell these stories. Out of these three, only one is set during the original timeframe for the Sherlock Holmes canon. Downey’s Sherlock lives in a world free of modern technology, so his very for-the-times modern approach to the art of deduction and innovative crime-solving techniques (something that was not prominent during the time period) is even more recognizable.

Take away the time period and add in some cell phones, and for me, Sherlock’s brilliance almost turns into a cockiness that isn’t nearly as fun to explore. (I’m mainly referring to the Benedict Cumberbatch Sherlock in particular here.) Let’s take a look at each of these works and why, for me, the Sherlock Holmes movies with Robert Downey Jr. and Jude Law are a better representation of these classic characters.

First, Sherlock. While the first season was truly one of the best shows I have ever seen, Sherlock quickly went from a genius to an asshole, using his intelligence to talk down to those around him because, in the modern era of technology, being intelligent isn’t exactly that extraordinary. Sherlock often comes across as cold and aloof and distant from humanity in a way that he was not in Conan Doyle’s stories. Sherlock may have been antisocial there, but he wasn’t often so disdainful.

The show also treats Sherlock’s drug addiction differently than in the original Sir Arthur Conan Doyle stories. As Sherlock fakes his own death and comes back to life, he loses himself once again to drugs and it throws his intelligence and ability to use the art of detection into question. Whereas within most Sherlock Holmes stories, he turned to drugs to stimulate and clarify his mind (by his own reasoning) but okay, Steven Moffat. (Elementary depicts this more faithfully, with Sherlock sometimes feeling like he needs the stimulation of heroin in order to see the bigger picture.)

The struggle of Sherlock Holmes and his addiction is a through-line for all three of the modern tellings because it stands out in the Conan Doyle canon. Watson, who is probably projecting Doyle’s own medical training, does work to get his friend away from harmful substances; even though both cocaine and opium were legal at the time the stories are set, their detrimental effects were known to Watson (and Doyle).

That being said, I think the modern setting of both Elementary and Sherlock make Sherlock’s addiction more of a plot crutch than necessary, piling on a lot of modern moralizing around drug use and addiction that is not reflective of the literary character. As this excellent article on “Sherlock Holmes’ Addictions” explains:

Sherlock Holmes, the most famous consulting detective in literature, used occasionally cocaine and morphine to escape, as he said, from “the dull routine of existence.” This was nothing unusual in Victorian times because sale of opium, laudanum, cocaine and morphine was legal. Victorian users took these dangerous drugs as self-medication and as recreation.

Watson eventually succeeds in “weaning” Holmes from the habit: “For years I had gradually weaned him from that drug mania which had threatened once to check his remarkable career. Now I knew that under ordinary conditions he no longer craved for this artificial stimulus, but I was well aware that the fiend was not dead, but sleeping.” (The Complete Sherlock Holmes, vol. II, 174) This is certainly a pretty modern way of viewing addiction for Doyle’s era, and it’s somewhat more even-keeled than the shows’ approach, which turn Sherlock into an unstable addict who is at times one indulgence away from destroying his life.

So let’s talk about Elementary. A show that changed the way we view John Watson (mainly because her name was Joan and she was played by Lucy Liu) and Moriarty (shout out to my girl Natalie Dormer), it brought the idea of Sherlock Holmes into a modern era but wasn’t completely beholden to the story-telling aspects of Sir Arthur Conan Doyle (as Sherlock was). Still, part of Sherlock’s charm was lost because, again, a modern setting can stretch our belief that only this one man (and eventually one woman, in Watson) have such spectacular insight into crime-solving while the rest of the police blunder about. At least Miller’s Sherlock receives help from a motley crew of “irregulars” just as Conan Doyle’s Sherlock did.

Yet with the BBC Sherlock already on when Elementary went into production, it felt strange to me that another modern-day, “rebooted” Sherlock was being made when I would have loved to see a show set in the Victorian era, where Sherlock’s methods were truly ground-breaking.

That’s why, for me, the recent movies Sherlock Holmes and, subsequently, Sherlock Holmes: A Game of Shadows work well because they are honoring the time in which these stories took place and recognize that then, without the use of modern technology or how we use forensics now, Sherlock Holmes was someone that people would rely on much more than they would in the modern world. Of course, those movies are over-the-top action romps that many Sherlockian fans find to be silly and, obviously, less than faithful in their presentation of the canon. But Sherlock and Watson always seem most at home to me amongst Victorian trappings, even if we indulge in some steampunk aesthetic and bare-knuckle boxing. (Yes, I understand that Sherlock Holmes did, in fact, box. Still, point stands.)

That’s not to say I don’t like Sherlock or Elementary. I very clearly do. I love any telling of Sherlock Holmes. I just think, when you bring him into our world, you lose some of the importance that Sherlock has because everyone with an iPhone can record something for the police detectives to look at.

But Sherlock’s art of deduction back before cameras were everywhere? Well, that’s fascinating, my dear Watson.

Who’s your favorite Sherlock, and Watson, for that matter?