Mobilyze! App Aims Use Your Smartphone To Diagnosis Depression, Dole Out Advice 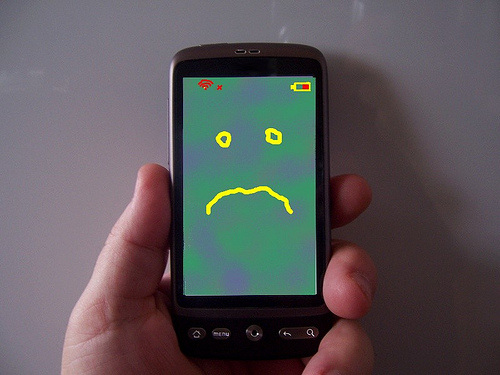 Your smartphone already knows a lot about you at any given time, like where you are, whether you’re moving, if you’ve been emailing or texting a lot, or if you’re missing a lot of calls. But is this enough information to, say, diagnose depression? Researchers at Northwestern University are aiming to find out with the app Mobilyze! which hopes to do exactly that.

The concept is based around pattern recognition. “We’re trying to develop individual algorithms for each user that can determine specific states, so their location where they are, their activity, their social context, who they’re with, what they’re engaged in and their mood,” psychologist David Mohr told The Daily Mail. In addition to noticing that you’re depressed, Mobilyze — still in development, by the way — might also send you a text urging you to get up and do something like, you know, get a life. Although I imagine it’d be a little more gentle about it.

Tests have been showing positive results so far: Eight volunteers, all with major depressive disorder, reported feeling better after some time with the app. They also showed improvement both statistically and clinically. Granted, a test on eight volunteers is not exactly a significant sample size, but larger, wider tests are planned for this summer.

Part of me keeps wanting to rail against the idea of your smartphone picking up on your depression, especially by such circumstantial means. I keep imaging someone who’s lost their phone under a couch for a few days or has been sick with food poisoning picking up their phone only to see it gleefully say “Hey buddy! You should go hang out with some friends!” before throwing it across the room in frustration. But then I have to consider that they only people who would ever have this in the first place would probably be people who are actually depressed, or are in danger falling into depression. In those circumstances, the circumstantial evidence might just cut it. Go figure, right? I’ll be interested to see what kind of results further tests turn up, and whether or not they’ll have the option to let Clippy deliver the advice.