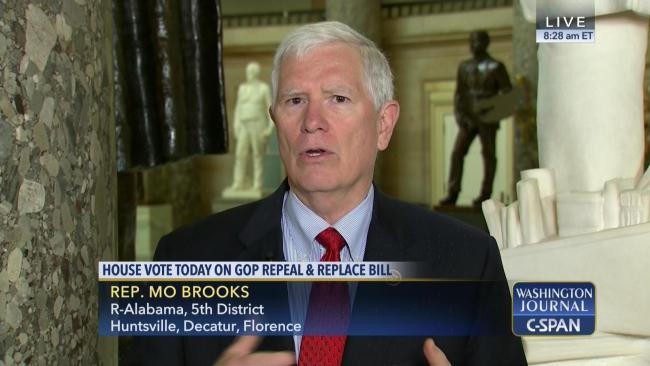 Back during the GOP’s springtime bum rush to repeal Obamacare and threaten millions of Americans with the loss of their insurance (for many, a veritable death sentence), Congressman Mo Brooks (R-AL) spoke his mind on the subject. And what was on his mind was the implication that there was a way to live “the right way” and that those who were ill or had a preexisting condition should naturally have to pay more for their healthcare costs, because they had strayed from the righteous path of the healthy. Well—turns out it’s a good thing that Mo Brooks has that fancy government healthcare.

In a speech on the House floor on Wednesday, Brooks announced that he has been diagnosed with prostate cancer. Per ThinkProgress:

“Don’t ever, ever, take your health or family for granted. During the holidays, enjoy your family, because no one, no one, is promised tomorrow,” Brooks said, adding that he learned he has cancer following a doctor’s scan in October.

There’s a couple of things that are important to unpack here. The first is that Brooks’ cancer was discovered during a doctor’s scan that until recently many Americans could never have conceived of being able to afford, and many still could not. There is no doubt that his prognosis will be improved due to earlier detection than it would have been otherwise. Brooks was only able to have such a routine scan because as a U.S. Congressman he has excellent healthcare coverage. Remember when members of Congress fought to repeal Obamacare a dozen ways—only not for themselves?

The second thing to look at is the comment that Brooks made in defense of Obamacare repeal in May (this followed Brooks’ attempt to introduce “a one-sentence Obamacare repeal bill” back in March, which, if it had somehow succeeded, would have condemned millions of Americans and provided no other options). In May, Brooks was a singing a different tune:

“My understanding is that (the new proposal) will allow insurance companies to require people who have higher health care costs to contribute more to the insurance pool,” Brooks said in comments that generated swift backlash. “That helps offset all these costs, thereby reducing the cost to those people who lead good lives, they’re healthy, they’ve done the things to keep their bodies healthy. And right now, those are the people — who’ve done things the right way — that are seeing their costs skyrocketing.”

Those people “who lead good lives,” those magical, nonexistent sickness-immune people “who’ve done things the right way” were meant to be held in stark contrast to their opposite: those who are subject to pre-existing conditions, or are disabled, or have been struck by the myriad of illnesses and afflictions that can attack anyone at any moment.

Those people surely must have done something wrong. Perhaps they were leading bad lives. It’s not hard to read between Brooks’ bullshit lines and hear his dog whistles against the poor, the addicted, the groups that have been chronically denied access to good healthcare in America, perhaps those loose and immoral women who are always yelling about access to reproductive health services. Why should good people have to pay for the bad?

Of course, what Brooks’ ironic diagnosis drives home is one of the most difficult truths of being human: anyone can get sick at any time. And they will. Even paragons of health as we understand the ever-shifting field of healthy practices are subject to illnesses like cancer, because cancer is a fucking piece of shit that does not discriminate or care that you went to Pilates today.

Cancer comes for young children—had they not lead good lives, Mo?—and it comes for the old, and it comes for fit marathon runners who live on green juice and quinoa, because cancer does not care who you are or what you have done. Certainly, there are types of cancer for which some lifestyle choices can increase one’s chance of developing it, and there are practices that can be seen as reducing those chances. But there is no failsafe way to be in order to stay cancer-free or we’d all be living it. And maybe talk to the people who are genetically predisposed about whether they’ve been living “the right way” or not.

I feel no schadenfreude that Mo Brooks was diagnosed with cancer. No one—no one—deserves a cancer diagnosis. I feel badly for Brooks, and extend sympathy to him and to his family. I am glad that he has awoken to the seemingly newfound discovery that “no one, no one, is promised tomorrow,” a preexisting condition for humanity that many of us were made to discover a long time ago.

But I can find it ironic that Brooks’ best chances of beating cancer is because he has the privilege of healthcare coverage that he sought—and fought—to take from his fellow Americans. Going forward, when he is eventually unemployed and out of Congress, by the standards that Brooks wanted to enact, he could be turned down for coverage entirely or forced to pay astronomical costs because now he’d number among the millions of other people with a preexisting condition through absolutely no fault of their own.

We shouldn’t have to experience hardship in order to understand it and want to help others who are suffering, but this is too often the case. I wonder if Brooks has come to understand how wrong he was. The only “right way” Mo Brooks lived his life is being lucky enough to work for a government that takes better care of its employees than he would have cared for the people he serves.