Wizards of the Coast have managed to do a few intellectual property crossovers using their Secret Lair Drop Series, including the Gozilla and My Little Pony crossovers. Now, they have teamed up with AMC to bring The Walking Dead into the world of Magic: The Gathering.

According to Wizards of the Coast’s official release on this Secret Lair x The Walking Dead collab, it will be available for preorder October 4–12. It’s a limited run, and the cards included in this will be completely new to Magic.

The iconic characters, including Michonne, will each have unique cards and mechanics that will be legal in Eternal formats. Legendary creatures will also technically be fit for Commander play, so that’ll be … interesting.

Heggen told THR that the team wanted to highlight Michonne’s warrior qualities of being a “lone, unstoppable samurai” and incorporated her two walkers into the mechanics of the card.

“That’s the story we want to tell with this card,” says Heggen. “It’s a really fun way of using mechanics to express these characters in a way that’s really satisfying.” 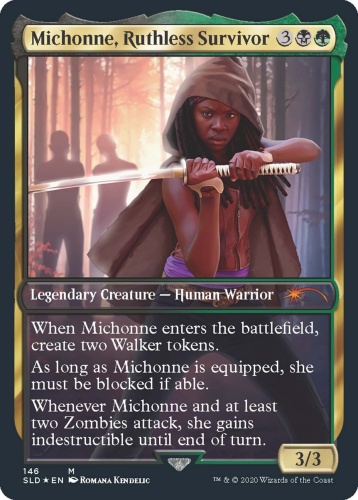 The card looks neat for what it is, and despite not having seen a single episode of The Walking Dead, I know it is a show that has had a huge impact on television.

That being said, the move has not been universally appealing, with people just not wanting to play The Walking Dead cards or have some of the characters, like villain Negan, present as a part of their gameplay. After all, despite the fact that the game is played by adults, the game is also for children, and The Walking Dead is not exactly “family-friendly.”

Yes, Magic: The Gathering has had its own villains and storylines within the universe, but there is something different between characters that you create in order to build a world in your own game and importing some.

Plus … Adventure Time is right there.

Some have also said that it would have been better to do as was done in the Godzilla set: have there be special Godzilla art, but also just regular MTG cards, as well—one for the collector value and one for actual play value.

As someone who loves Commander, but does not give two shakes about The Walking Dead, I just think that of all the shows to do this kind of team-up with, a show that has become a dried-up husk of its former self wouldn’t have been my first pick—especially one that doesn’t exactly have the best diversity record when Magic is attempting to add and highlight more diversity behind the scenes.

What do you think of the set? Is it a fun way of bringing these two things together. or is it just a weird precedent to set?

(via WoTC, image: Wizards of the Coast)