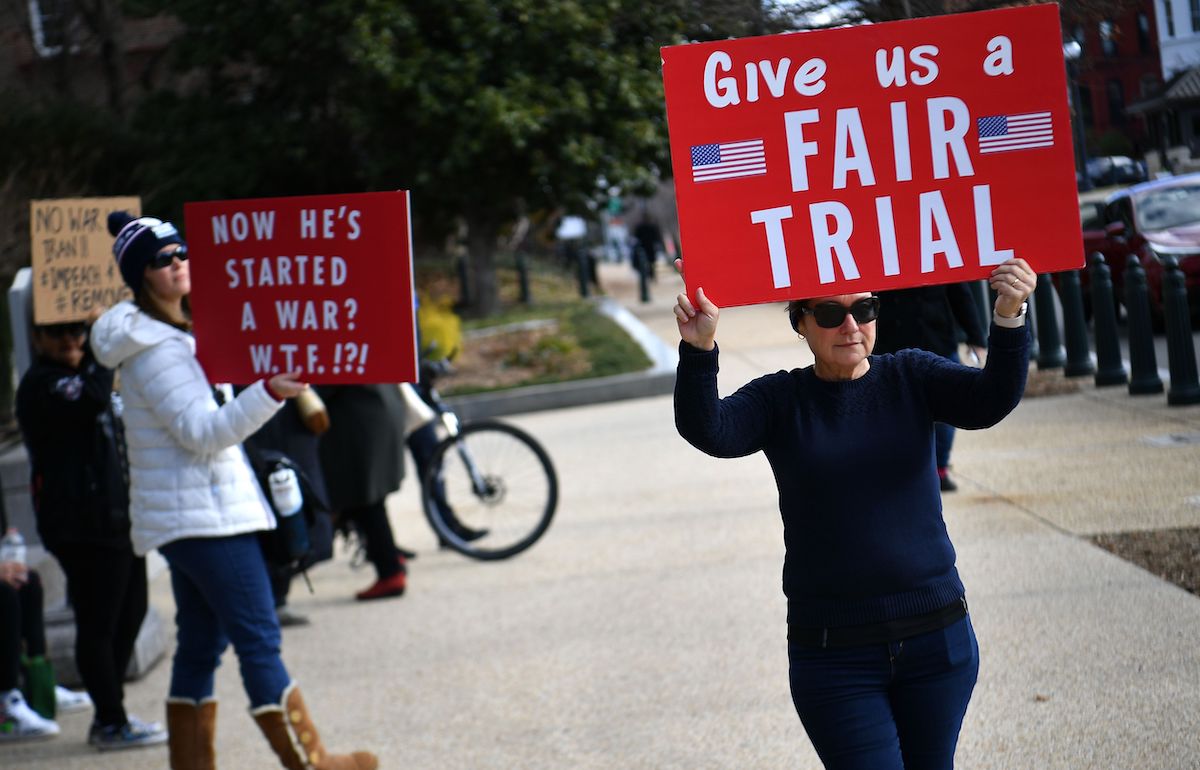 Donald Trump’s impeachment trial started in earnest today after last week’s swearing-in and it’s shaping up to be as big of a sham as we all expected.

Monday night, Mitch McConnell began circulating the proposed procedures for the Senate trial. The rules the Republicans have come up with are disgraceful.

First up, they proposed that each side would have 24 hours total over the course of two days to make their case. This led famed Watergate reporter Carl Bernstein to dub McConnell “Midnight Mitch” since the sessions, which begin each day at 1pm Eastern, could potentially go into the early morning.

“We’re looking at ‘Midnight Mitch’ and the so-called world’s greatest deliberative body, really embracing a cover-up that is there for all to see. That’s what this is about.”

“Everything in these rules is rigged…They are so afraid, so afraid of the facts coming out that they want things to be presented at two, three in the morning. Give me a break.” —@SenSchumer pic.twitter.com/g35qsU1w7T

According to an MSNBC chyron, the GOP has now agreed to give each side three days (still 24 hours) for their case, the same as what was given during Bill Clinton’s impeachment trial.

The issue of witnesses has been a big question leading up to today, with McConnell indicating he was not planning to allow them in the trial. His proposal does allow for witnesses, but more in theory than in practice.

Senators will be allowed to call witnesses, who will be deposed before members vote on whether or not they will be allowed to give their testimony. That means Democrats would need four Republicans to join them in voting to approve their witnesses, which will be difficult, though not entirely impossible–especially when there are people like former national security advisor John Bolton out here saying he’s willing to testify and that he has new, unheard information relevant to impeachment.

On top of all of this, the Senate is limiting access granted to journalists and outlets–even including C-SPAN, the ever-present congressional documenter.

Instead of unfettered access to the hallways and corridors surrounding the Senate chamber — a tradition for decades — journalists will be confined to roped-off pens as senators come and go from the trial. Walk-and-talk interviews with senators, a staple of congressional reporting made famous by TV shows like “The West Wing,” will be curtailed.

When you’re talking to a senator and he wants to keep talking to you but the cops said you can’t talk in the middle of the hallway so you have to step behind a rope in order to continue the conversation. This is how ludicrous these restrictions are.

The rules for journalists in the Senate gallery will also be stricter than usual, specifically around their use of electronics, making it much more difficult for them to offer live reporting. But it’s those roped-off hallways that are the real impediment to reporters being able to have the kind of access to lawmakers that they’re used to.

It’s not surprising that McConnell is forcing the trial through so quickly. He’s been promising as much for weeks, and he’s almost definitely looking to have this all wrapped up by the time Trump gives his State of the Union address on February 4th.

A lot of Republicans are going to have to walk a tightrope of not angering Donald Trump and Mitch McConnell while also not alienating voters. They’re expected to walk the party line, but there’s so much here that’s hard to dress up as anything but a full-on cover-up. Even if Trump is acquitted in this trial (which is likely), many of these lawmakers are still going to have to answer to voters in November.

While the overwhelming majority of those who support impeachment and Trump’s removal from office are Democrats, the number of Republicans who support at least a legitimate trial has been slowly growing. How are lawmakers going to defend their decisions here to those voters when it comes time for reelection? If they’re not going to worry about uncovering the truth of Trump’s alleged (and in some cases, admitted) crimes, maybe they’ll worry about that.

And if they don’t, at least they’re severely upping our chances of being able to look forward to another blue wave come November 2020.