Mitch McConnell Would Like You To Know He’s Perfectly Fine 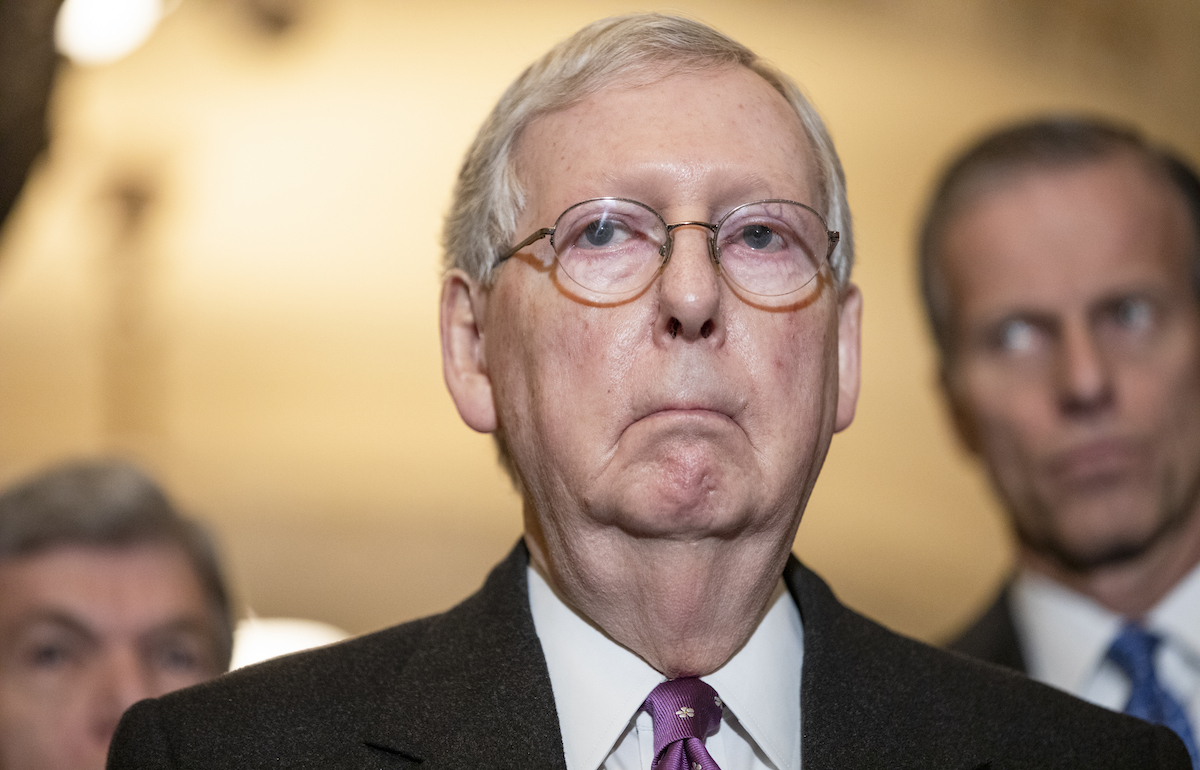 Mitch McConnell is just peachy, thank you, no further comment. After troubling photos of the Senate Majority Leader’s hands looking badly bruised set off speculation online, McConnell “responded” to reporters’ questions on Thursday by dodging them. He said there were “no concerns” about his state and replied “of course not” when asked if he had any issues with his health that the public should know about. McConnell provided no further information, and according to CNN, “His aide also declined to provide details when asked multiple times about the Republican’s health.” How reassuring!

This photo of Mitch McConnell’s hands from yesterday pic.twitter.com/9x5x2UhxvJ

The AP pictures showed McConnell, 78, with dramatically bruised and band-aid covered hands and a bruise on his face. Armchair and actual doctors online diagnosed a range of medical conditions that could have caused the bruising, from blowing a vein while drawing blood to taking anticoagulants and everything in between. Anticoagulants are certainly a possibility for McConnell, who had triple bypass surgery in 2003. Whatever’s happening with the Kentucky Senator, who’s up for reelection this year, it’s unlikely he’ll disclose that to the public anytime soon.

I zoomed in and lightened the picture a lot. A real lot.

The bruising is extreme, on both hands.

This man has some serious health issue and his Constituents deserve to know.

Indeed, it’s hard to imagine even the most dire prognosis distracting McConnell from his relentless drive to see Amy Coney Barrett confirmed to the Supreme Court just days before the presidential election. It’s also hard to imagine a high-ranking Democratic politician—especially a woman!—appearing in this condition without the media covering it breathlessly and a lot of talking heads talking about it non-stop. Remember when Hillary Clinton had pneumonia on the campaign trail?

Since McConnell’s assured us himself that there’s nothing to be concerned about, here are a few of the more irreverent takes that have been making the rounds this week.

You can’t convince me otherwise pic.twitter.com/Dkw0GlcQQf

If Nancy Pelosi had bruises & open sores on her face & neurotic hands w weeping wounds, the press would be on fire

Mitch McConnell is lying about his health as he holds up the stimulus during a pandemic & goes after our healthcare pic.twitter.com/Fx8a0kI0I9

Just slipped in the parking lot on one of Mitch McConnell’s hands.

Would Mitch McConnell ever lie to you or go back on his word? We’re sure everything’s copacetic.