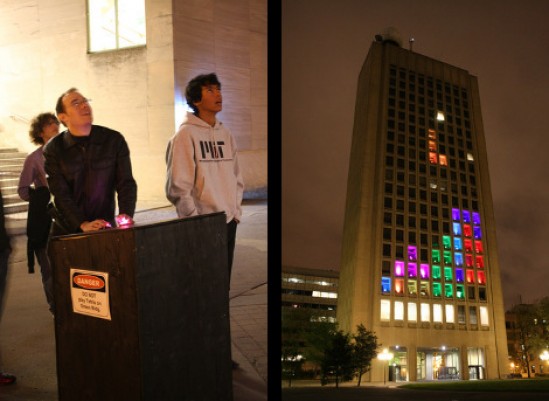 Over the weekend, a group of MIT students performed a feat that isn’t exactly unique, but generally impressive when coherently completed: They turned the outside of a building into a large game of Tetris. The students performed the feat on MIT’s Green Building, which is home to the MIT Earth and Planetary Sciences department. Players could move, rotate, and drop blocks, but there was a twist as the player progressed through the levels.

When the player hits the second level, the blocks would become more pale in color, making it more difficult to to see, and during the third level, the colors on the screen-building shifted, making it even more difficult to keep track of the board. Granted, the point of Tetris isn’t to match colors, so if one could separate themselves from that, the new difficulty devices may not have come into play too much.

Check out a video of the feat below.

(story and image via Hack a Day)