Missy Proves Doctor Who Can Handle a Woman as the Doctor 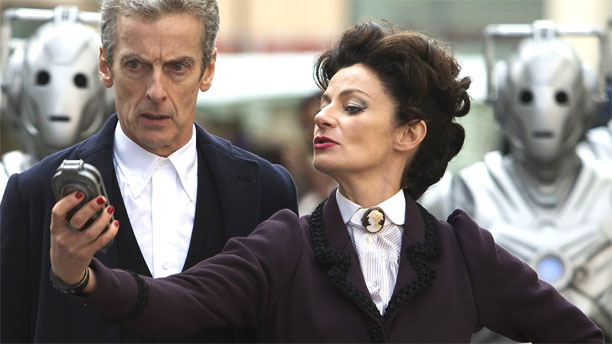 Over the fifty-three years of Doctor Who’s existence, twelve people have officially played the Doctor, a time-traveling alien with the ability to regenerate into a new body rather than die. And every single one of them has been a man, but technically, that’s not a requirement. Time Lord regeneration has always been kind of a funny thing. For obvious reasons, the show’s never been incredibly clear about how it works in-universe, but it’s generally accepted that the process allows Time Lords to regenerate as a different sex.

Given this fact, many fans have been clamoring for a more progressive casting choice in recent years. Thus far, the Doctor Who powers-that-be have resisted making the Doctor a woman, citing everything from parental discomfort with the idea to poor timing to a desire to cast specific other (male) performers. Fans have lobbed the female Doctor question at showrunner Steven Moffat for years, and his answers have run the gamut from vague to … vaguely offensive.

He once claimed he “didn’t feel enough people wanted it” and blamed female fans for being resistant to the idea in the same interview. So, it certainly seems safe to assume Moffat isn’t exactly what you’d call enthusiastic about the idea of making the Doctor a woman—which is actually kind of funny, given the fact that he spent a rather large chunk of the past three seasons writing about a female Time Lord who used to be a man. And doing it rather well, to boot.

In 2014, Moffat resurrected the Master, a villainous Time Lord who also happens to be the Doctor’s arch-nemesis and former childhood friend. The Master is many things: dark, complicated, frequently evil, and up until this point, also always a man. That all changed with the introduction of Missy (Michelle Gomez) in Season 8. Originally a mysterious stranger, the character was eventually revealed as “the Mistress,” a female regeneration of the Master (John Simm, when last we saw him). Her existence not only gave us onscreen confirmation that a male Time Lord could become a woman, it added new layers to both the Doctor/Master relationship, and the show in general.

Over the course of three seasons, Missy has engaged in a wide variety of villainy. She built a Cyberman army of the dead and tried to tempt the Doctor (Peter Capaldi) into using it. She manipulated Twelve and Clara’s (Jenna Coleman) lives to an excruciatingly detailed degree, to serve her own ends. And she casually murdered multiple people, [spoilers]including her assistant Seb (Chris Addison) and fan favorite character Osgood (Ingrid Oliver).[/spoilers]

In short, Missy is not anything resembling a hero. She’s not particularly sympathetic, likable, or always easy to watch. But Missy is important, and not because she’s wildly entertaining or gets an interesting story arc in her own right (which she is and does). No, Missy matters because she proves that Doctor Who can turn a male Time Lord into a female one and not lose any part of what makes that character compelling. In many ways, Missy is both more interesting and layered than several previous male versions of the character.

Because at the end of the day, that’s still who Missy is—another variation on a theme. She doesn’t suddenly become a different person entirely—at least, not any more than any Time Lord regeneration is a different person—just because she’s now a woman. Sure, she’s got a very particular fashion sense and some seriously amazing hair, but everything about her character builds on what’s come before it. Missy is the Master, still, with the same traits as she’s always had. She’s vampy and theatrical, a snarky sass machine with a crazy streak and great comedic timing, and she certainly epitomizes the height of camp, with her costume that resembles an evil Mary Poppins and perennially pouty expression.

But, here’s the thing: These aren’t new developments for this character, at all. Back when the Master was a man, he still swanned about the universe in overly dramatic outfits, made ridiculous speeches, and even partially turned into a cheetah once. He loved disguise and deception and pretending to be someone he wasn’t. There was a whole sequence back in Season 3 where he just danced around a flying aircraft carrier, lip-syncing Scissor Sisters. Nobody gets to criticize Missy for being campy, not after that.

And the linchpin of her existence remains the same as it ever was: the Doctor. The Master is, in whatever form she might take, still his oldest friend and closest enemy. The bones of their story together are still the same. She’s jealous and possessive; he’s convinced she’s worth saving. She makes plans for world domination; he thwarts them. They argue about both the past and the future. Occasionally she helps him, or he lets her go after capturing her. Their relationship remains complicated, their connection obvious. They’re still a pair, as they always have been, and probably will be until the show ends.

Their relationship has evolved over the years, to be sure—post-2005 Doctor Who has particularly leaned into the idea that the two aren’t necessarily sworn enemies, but difficult or uncomfortable friends. (Or at least, they’d occasionally like to be.) Season 10 takes this idea of change a step further, building one of its major stories around the question of whether Missy can ever be truly reformed or redeemed. Of course, most Whovians know that there’s no way any version of the Master could possibly stay good forever, no matter what his or her intentions are.

But, we’re asked as viewers to entertain the possibility that Missy’s desire to try to be is legitimate. Her dalliance with the concept is fascinating—from her debate with the Doctor over what “good” even means to her tears over the many people she’s killed. But the real reason it works so well is because of who Missy is. Her story here isn’t driven by her gender, but by her character. It’s not a “female Master” story, but simply a “Master” story, with all the attendant emotional and historical baggage that comes along with it. She’s always wanted her friend back.

To be fair, certain aspects of Missy’s character often seem to be coded as evil because they are feminine, such as her aggressively flirtatious behavior or her bouts of madness and shouting that uncomfortably toe the line of of “hysteria.” It’s worth asking whether a male Master would be depicted in tears quite as frequently. Missy’s storyline, like Doctor Who itself, is not perfect, nor is it beyond critique. She isn’t exactly a feminist icon, but she is still a fascinating antagonist and occasional partner for the Doctor and a pioneer, of sorts, for the show.

Sure, you can argue that Moffat turned the Master into a woman to silence critics clamoring for a female Doctor, but that gamble seems to have failed, since Missy’s existence does nothing so much as prove that it’s probably time for Doctor Who to have one. During a late Season 10 episode, Missy actually takes up the mantle of the Doctor for a moment, leading companions Bill and Nardole off on an adventure before everything predictably goes wrong.

It’s a brief scene that’s played for laughs and funny one-liners, but it is nevertheless exhilarating. We’ve never seen this before, not really—a female Time Lord in charge and doing the same things the Doctor does every week. Being the Doctor, come to that. And, suddenly, it feels like possibility. It makes us ask—again, and in a stronger voice—why we can’t see this regularly? The Master became the Mistress and his story was stronger for it. It stands to reason the same might be true for the Doctor.