It seems that someone thought fireworks weren't festive enough for the Fourth of July. 'MURICA! 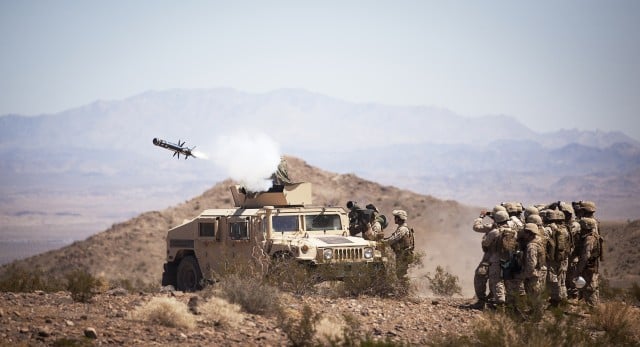 Though your weekend sucked because it was like a trillion degrees pretty much wherever you were in the U.S.? Well, you’re not wrong, but at least you didn’t have to leave your nice, air-conditioned living room because your block was in danger of exploding. A neighborhood in Leesburg, Virginia had to be evacuated this Saturday after a woman discovered anti-tank missiles while cleaning out her garden shed. Neither she nor the authorities have any idea what they were doing there.

Over a hundred people had to leave the 400-yard vicinity of the area while police, emergency services, military personnel, and a bomb squad dealt with an unusual situation for a suburban town in northern Virginia. According to Loudoun County Fire-Rescue Battalion Chief James Williams, the weapons were “determined to be military ordnance—anti-tank devices probably from the Desert Storm era.” Authorities reported that the missiles were live and armed, and between 10:00 and 11:00 Sunday night, they managed to safely deactivate the fuses. Once the missiles were taken away by a U.S. Army convoy, residents were able to return to their homes, just in time to dread going to work the next morning.

Mayor Kristen Umstattd reported the status of the ordnance to the local media and also updated her Facebook page over the course of the weekend, thanking everyone for their cooperation once the situation was resolved. The mayor said that the owner “had never taken a look in the shed until she was about to go on vacation and decided to do some cleaning, and this is what came up.” (Note to all homeowners — take a look in your tool shed for us, will ya? Just real quick. Apparently, this happens.)

While an investigation has been opened into exactly what the missiles were doing in the shed, it’s hard to think of a response to the question “What are these anti-tank missiles for?” that isn’t “For destroying tanks.” While it’s great to have the neighborhood out of danger — after all, live anti-tank missiles aren’t the safest thing to keep next to the riding mower — I doubt anyone would be complaining about finding a few anti-tank missiles in a zombie apocalypse or Red Dawn scenario.

In fact, Loudoun County High School’s team is the Raiders, which is just begging to become the name for a rag-tag band of resistance fighters. Looks like they’ll have to raid an enemy base for their heavy arms just like Swayze and company did, though that’s not a bad thing, necessarily. Nothing like disabling a Soviet armory to build character, after all. It’s pretty much the ultimate team-building exercise!