She May Not Have Won, but Miss Texas Is My Miss America 2018 | The Mary Sue

Win or Lose, Miss Texas Is My Miss America 2018 After Her Takedown of Trump’s Charlottesville Response 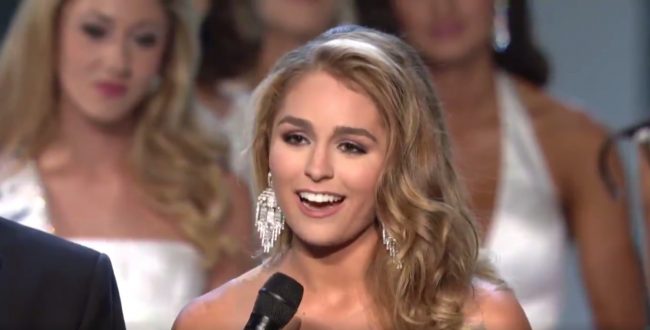 While being anti-racist should never be seen as heroic—because it’s simple, human decency—there are times when we take it for granted that people will keep their views more “diplomatic.” The Miss America pageant is generally seen as one of those times. This year, however, it seems that both the Miss America pageant, and Miss Texas, Margana Wood, know that today’s political climate requires directness.

The second round of questions during last night’s pageant were decidedly more political than the first. When Wood was asked to select her judge at random, she pulled editor Jess Cagle’s name out of the basket. He asked, “Last month a demonstration of neo-Nazis, white supremacists, and the KKK in Charlottesville turned violent and a counter-protestor was killed. The president said there was shared blame with ‘very fine people on both sides.’ Were there? Tell me yes or no, and explain.”

This was Wood’s response, and she took zero time to think about it:

Wood replied, “I think that the white supremacist issue, it was very obvious that it was a terrorist attack, and I think that President Donald Trump should have made a statement earlier addressing the fact, and making sure that all Americans feel safe in this country. That is the number one issue right now.”

She not only rightfully called the violence of white supremacists terrorism (why is that so hard for so many people to accept?), but she called out Donald Trump and his lack of a response. In a environment during which young women are pit against each other in a contest of beauty, as well as talent and intelligence, it would be understandable if any of the young women didn’t feel entirely comfortable “rocking the boat” when the entire event is predicated on keeping them in boxes and grading them. But Miss Texas demonstrated that things like ethics and integrity are much more important than taking home a title.

Also impressive was the fact that the Miss America organization allowed this question in the first place, in which Cagle specifically named neo-Nazis, white supremacists, and the KKK. Not the “fine people” on “that side,” but those hateful, racist people who go by several names, but all want to maintain white supremacy at the expense of the rest of America.

The fact that the Miss America organization is having these kinds of conversations, and the fact that contestants like Margana Wood aren’t afraid to speak the truth gives me a lot of hope. It reminds me that all is not lost, and that for all of our systemic racism and sexism, the United States still has people within it willing to fight for all of its citizens.

North Dakota’s Cara Mund may have taken home the Miss America 2018 crown, but Miss Texas, Margana Wood will be my Miss America.