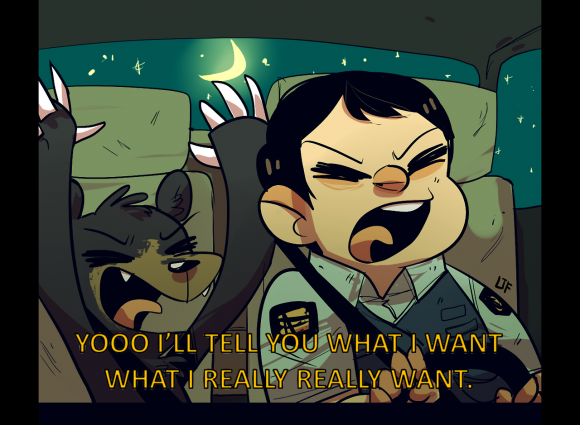 Two and a half years ago, Constable Suzanne Bourque was interviewing witnesses about the activity of a too-friendly-for-his-own-good bear cub who’d been pestering visitors at the Terra Nova National park in Newfoundland and Labrador when the bear cub himself showed up. The ensuing pictures were un-bear-ably adorable, but, in the way of things on the internet, ran under the radar for a while until they finally got their chance at becoming internet gold.

First there was the concept: 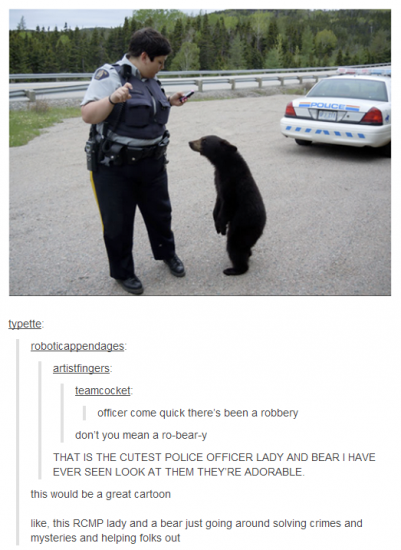 And then an artist arrived on the scene in the form of Ami Guillen, or Lemonteaflower, who, for example, drew the top picture on this post, and gave the then-unknown officer and bear the names Miss Officer and Mr. Truffles. From there, as so many things on Tumblr do, the idea has evolved into a tiny fandom of its own, with concepts, character lineups, gifs, Build-A-Bear dolls, and even educational cartoons about how campers can help bears by not feeding them. After all, that’s the trouble Bourque was trying to address when the picture was taken in the first place: eventually the real life Mr. Truffles was going to get so big that people would no longer think it was cute to have him walk up to them to sniff their hands and pockets.

And speaking of Bourque, she’s delighted at the little fiction that’s been drawn about her life based on a single photo. Some of it isn’t exactly fiction, either: there was a time when she was totally into The Spice Girls. “This certainly takes the cake for me. My sister, rightly so, said retire, basically, you’ve literally, pretty much, hit the peak of your career.”

The other good news is that Constable Bourque is confident that the real-life Mr. Truffles is still living happily in the wild after being relocated. Reports of his euthanization surfaced n 2011, but she believes those reports mixed him up with another too-friendly-for-his-own good bear cub who was also pestering folks in the same area at the same time. So don’t feed the bears, people. Feed the Tumblr content machine!

For more of Constable Bourque, and Miss Officer and Mr. Truffles, you can check out the Tumblr tag, this video interview for the Canadian Broadcasting Corporation, or The Daily Dot’s interview.