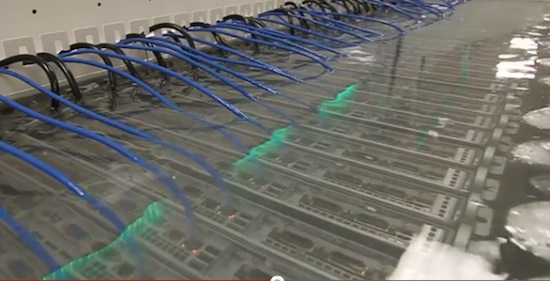 Intel servers have been getting a spa treatment to try and cut energy costs and it seems to be working. The company has been running some of its servers submerged in experimental mineral oil baths for a year in an effort to cut down the energy they use running and cooling the machines — and the expense associated with it, lest anyone think this is a totally altruistic endeavor. After a year, the results are in, and they’re pretty promising.

Intel saw sharp declines of up to 95% in the energy they put toward cooling servers that were immersed in mineral oil baths. That translates to an overall energy savings of between 10 and 20%, which is no small amount when you’re in the business of running energy gobbling server farms. The servers that were immersed in oil also showed no signs of damage after humming along for a year in a sea of mineral oil. The oil also had the happy side effect of eliminating dust that can overheat servers or otherwise interfere with their performance.

Oil immersion servers have the potential to drastically cut power costs for running data centers and server farms, and to make them more efficient by letting servers less power to staying cool and more to doing the actual work of computing. With these results in the books, you can look for the company — and others, no doubt — to continue their work engineering servers that are optimized for running in oil immersion baths.

(via PhysOrg, image courtesy of Intel)