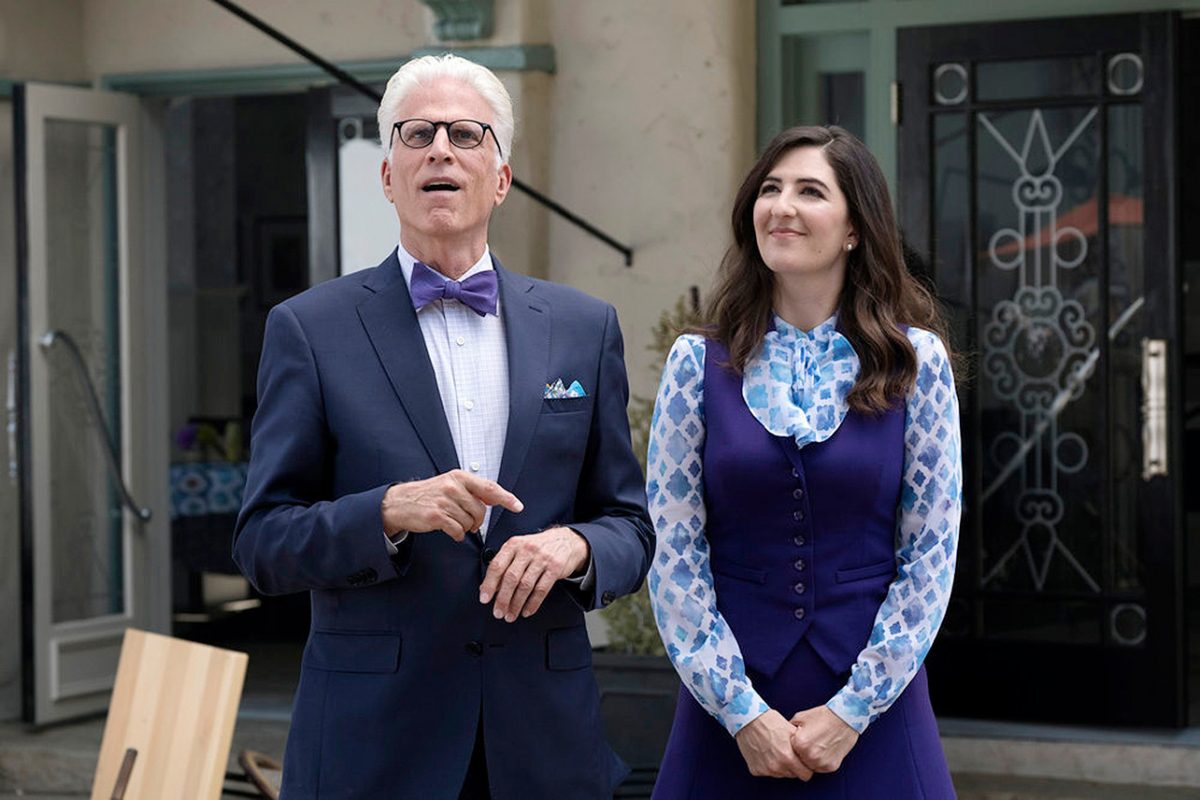 Thursday’s episode of the The Good Place, titled “Janet(s)”, was an especially trippy chapter for the ethereal cult comedy series. The episode picks up right after the gang has fled through a portal to the afterlife to escape a pack of demons who followed them to earth. To keep the four fugitive humans safe, Janet hides them in her void while she and Michael visit the accounting office to find out what’s wrong with the universal points system.

Once inside Janet’s void, Eleanor, Chidi, Tahani and Jason find themselves transformed into Janets, and from there the episode turns into an acting showcase for D’Arcy Carden, who embodies every character. The episode took over a year to plan, and featured extensive special effects. We got the chance to talk to creator and showrunner Michael Schur (Parks and Recreation) and Janet herself, D’Arcy Carden.

Schur said the idea came about towards the end of season two, and “The idea was immediately, Janet takes everybody into her void, and they’re all Janets. Part of the process was we started rehearsing very early, because we got the actual cast to do the scenes, we filmed it so D’Arcy could watch their mannerisms and stuff,” before playing the roles herself.

Carden watched the tape “a million times, like daily” to prepare for the roles, including to listening to audio of the episode as well. In addition to the acting challenges, Carden also had to contend with the painstaking demands of VFX. When shooting the kissing scene at the end, Carden said, “there was a long pole with a literal pair of lips, plastic lips on it exactly at my lip height, and it was on a lazy susan that was controlled by some dude, so I had to sort of hug air and kiss these lips and we’d start spinning and I couldn’t smile or laugh. Kissing was one of the funniest, wildest parts, and then I had to kiss Kristen [Bell], but it had to match exactly the head tilt … every inch had to match up … it was like surgery almost.”

Schur said of the ambitious episode, “when we first had the idea a million years ago, we we’re like, ‘can this be done?’, and Orphan Black did it like a thousand times, and that’s what I kept thinking of, I remember that scene in Orphan Black when all of the clones finally meet each other, and Tatiana [Maslany] was handing herself things and talking to herself and I was like, ‘there has to be a way to do this’, and that show gave us a boost, I would say, at the beginning when we were debating whether or not we could pull it off.”

On which character was most difficult to emulate, Carden said, “It is hard to play five really well established characters that I’ve known for years now, it’s like a different thing … Kristen was very hard, Eleanor, because she’s just so subtle … Will [Jackson Harper] was so hard because he has such a distinct voice in my head, and it was hard … I didn’t want to do too much of an impression … I lost my mind, you guys, I went crazy!”

Schur said of Carden, “D’Arcy’s in this episode twice as much as anyone can be in an episode … it was crazy, it was a form of psychological torture that we put D’Arcy through, but it turned out wonderful!”

Carden said of the experience, “it was one of the best weeks of my life, in weird way. It was stressful but it was with the best people, and everyone was so supportive, and everyone was on board to do the same thing, and everybody had a great attitude about it … we just had such a good week.”