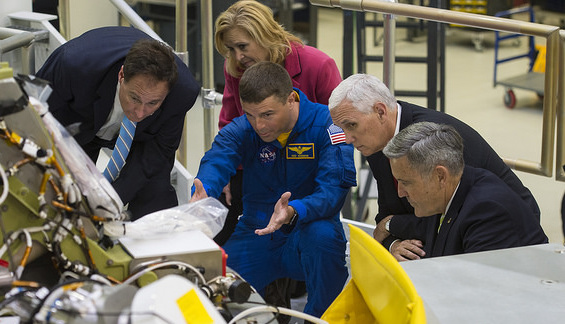 It’s time for your regularly scheduled break from all of us basically writing “everything is on fire” in regards to all the very serious dangers posed by Trump administration policies, which comes in the form of some more photos from the veritable Meme Team that Trump put together to run the country.

First up, we’ve got Mike Pence making a solid entry into the meme pantheon that so far includes a glowing orb, some ridiculous handshakes, Jared Kushner essentially starring in his own Wes Anderson movie, and other difficult-to-top moments. Pence was up to the challenge, though, in a visit to NASA where he also promised that the United States would send astronauts back to the Moon, as well as to Mars. But true to form for the Trump administration, what we’ll remember most is an embarrassing photo:

Suddenly I understand why he won’t have dinner with a woman who isn’t his wife. pic.twitter.com/Vk2BLDRadR

There’s Pence, on a tour of the Orion clean room, clearly disobeying the “do not touch” sign on the “Critical Space Flight Hardware” he seems to be trying to make peace with through calming physical contact. (Here’s the original on Getty.) There’s plenty of irony about someone in the Trump administration, particularly Pence as noted above, putting their hands where they’re not supposed to—especially since the Orion capsule is NASA’s crew capsule for actually sending astronauts to places like Mars, so Pence might not want to disturb anything if he really meant what he said.

Of course, the internet had a field day:

we are all thinking the same as critical-space-flight-hardware i think. pic.twitter.com/tbNDOIaAeD

i couldn’t help myself. pic.twitter.com/AxdVtF9HIP

It was OK to touch the surface. Those are just day-to-day reminder signs. We were going to clean it anyway. It was an honor to host you! https://t.co/gu8zxknsJv

Not to be outdone, Trump stepped up his awkward handshake/meeting game with world leaders in Germany:

Find someone that looks at you the way Donald Trump looks at Vladimir Putin pic.twitter.com/m5agaIfbb2

Yes. That’s me. You’re probably wondering how I ended up in this situation pic.twitter.com/hHls2ebb3G

And yes, one of those leaders trump met was, indeed, Russian President Vladimir Putin, who Trump met in a meeting that went way longer than scheduled, which also led to this:

Putin using this kind of chumminess to disarm Trump was laid out by Vanity Fair last night https://t.co/mL3oQA9pxV https://t.co/SWMr0Pnvs2

What a charming, blossoming friendship. Truly, the only appropriate reaction: