Visually Impaired Kids Get a Feel for Code | The Mary Sue 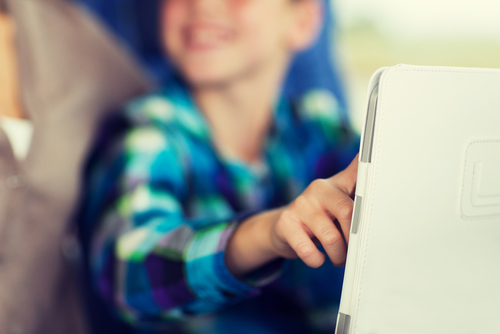 Project Torino is a Microsoft research initiative based out of Cambridge, UK. Its aim is to help introduce coding fundamentals to elementary students with varying disabilities. The challenge for the team was not just creating a teaching tool that could be used to teach children who are visually impaired, have dyslexia, or are autistic, but to come up with a curriculum that would work inside today’s inclusive classroom structure.

Students with disabilities often face barriers when they’re first introduced to science and engineering concepts. Our primary teaching methods are based on pictures, diagrams, Power Point presentations, and other visuals, all of which are inaccessible to many. “Coding practices for kids are 110% visual,” says Natalia Shaheen, former Project Director for the National Federation for the Blind National Center for Blind Youth in Science, a U.S.-based program. One of the primary learning tools for elementary students is a program called Scratch, which was developed at MIT. The program allows for children to drag and drop interlocking tiles with simple code instruction, thus issuing commands. It makes it possible to design simple scenes, and they can build up from there as they become more familiar with concepts.

Unfortunately, Scratch is not accessible via a screen reader, so it is not a good way of teaching blind children. “There are activities to teach kids the tenets of programming without actually programing,” Shaheen continued. “There’s a sorting activity, kids need to sort themselves in some logical order, by birthday, and they have to do it in some sort of systematic way.”

This tactic does not allow students to tangibly jump into the code and learn how to create. It is difficult to go from a sorting game and chess to full coding without some steps in between—steps that these children’s peers are getting. In Microsoft’s official blog, Steve Tyler, the head of strategy and planning for the Royal National Institute of Blind People based in the UK, explained that chess used to be a main strategy for teaching these types of concepts. Project Torino takes this to the next level. The research team worked to create a tactile version of already existing visual programs. They created what they call “pods,” which are linked together to create stories and music.

During development, the team worked with about twelve children. In the Microsoft blog post about the initial research, Nicholas Villar mused that all the pods were originally white. This falls into a classic misconception many people have about vision loss: the way something looks doesn’t matter. Most people who are legally blind still have usable vision, so the project found that they needed to redesign the pods to have more color contrast to make them easier for the students to see. The team also discovered that to allow students to work together, they had to design them counter to the instinct to build small. Group dynamics are different with a group of blind individuals; vision allows for many people to have the same or similar view of an object, whereas if a person’s primary input is tactile, there needs to be a chance for everyone to get their hands on it. The pods needed to be large enough for more than one child to hold them so they could work collaboratively.

“We really honestly designed it with them. It was a collaboration,” Villar was quoted in the Microsoft Blog article. “We thought we were going to be doing something for them but we ended up designing with them.”

The design is also important because it allows for students to work with sighted and visually impaired peers at the same time. Blind students working in inclusive classrooms are left out of group activities not only when materials aren’t accessible, but also when they have different materials. The beauty of this design is that they work whether students are able to see or not. Which, for the modern STEM-driven inclusive classroom, is vital.

Project Torino has finished its design process and is ready to expand into a beta trial, searching for potential participants in partnership with the Royal National Institute of Blind People. For now, the project is only open to students inside of the UK, but the project is hoping to ultimately open it up to students and teachers from around the world in order to help organizations like National Center for Blind Youth here in the U.S..

Kit Englard is an orthodox Jewish, deaf-blind freelance writer whose primary focus is working toward expanding opportunities for people with disabilities in STEM fields. Currently she is working on Femme De Chem, a blog that will focus on Geek Culture, Science News, and Disability launching April 3rd! Follow her on twitter at @MathnSkating, and like Femme de Chem on Facebook!