From Microsoft: 3-D TV That Won’t Make You Look Like An Idiot 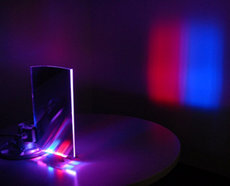 Things are always better when you add another dimension to them. First we had 1-D movies like The Line and Linear, then we had much better 2-D movies like Citizen Kane and Paul Blart: Mall Cop, and now we have 3-D greats like Avatar and Up. TV has been stuck in two dimensions for far too long, but now we’re starting to see glimpses of 3-D television in the form of tons of obnoxious commercials.

But you know why it’s really not catching on? Two reasons:

1) There aren’t really that many things on TV that are actually aired in 3-D.
2) The glasses.

It’s fine to don those embarrassing frames in a movie theater where it’s dark and nobody’s looking at you. But in your well-lit living room, a whole family of goggled TV-watchers is just a little odd-seeming. And that’s not to mention the glasses can be pretty expensive.

But never fear, Microsoft is here making a claim that’s lofty but much needed. They intend to bring us 3-D television, without any need for glasses. They do this by aiming the light based on where the viewer is sitting, providing the same effect that would be achieved using the eyewear. This has been done on the small scale before, but now it could be big, both literally and figuratively.

There are some kinks, though, that need to be worked out for this to really catch on. First of all, the TV as it’s currently modeled can only provide 3-D entertainment for two people, and it’s unclear whether it would look completely distorted to a third wheel observer. Also, the viewing angle is very restricted, so those two people had better like each other enough to snuggle.

Still, it’s encouraging that breakthroughs are being made to avoid the glasses annoyance. The work being done on the lenses at Microsoft is just the beginning, but eventually we may have full 3-D TV, without requiring accessories, that can be viewed by as many people as you want.

(Via Technology Review via PopSci)