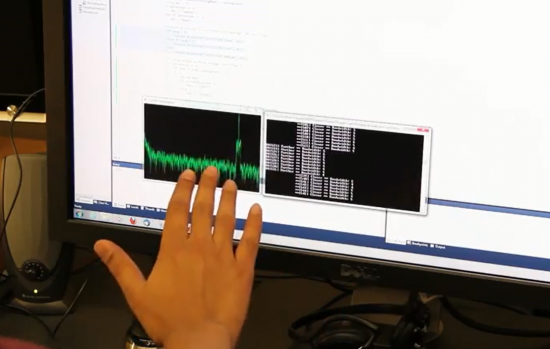 Sure, Kinect is cool. There’s definitely something to be said for waving your hands at a TV and actually accomplishing something. That said, the tech can still be kind of awkward and janky, and on top of that, gesture recognition systems and their cameras tend to be expensive, especially considering the general lack of fine tuning across the board. Microsoft is working on another system that might be able to solve the price problems. SoundWave works much like Kinect, but will work by using your computer’s built-in microphone and speakers, and nothing else.

The trick is the Doppler effect. For those of you who don’t remember your physics very well, the Doppler effect has to do with the way a frequency of a sound changes depending on how far away you are from it. The perfect example is how the sound of a police siren seems to morph has the police car flies by you. You can probably see where this is going.

SoundWave uses your computer’s speakers to emit a buzz at ultrasonic frequencies, and the microphone picks up the results of this buzz plus whatever effects your movement has on it Doppler-wise. Then, the software does some computational backflips and can ultimately figure out how your hand is moving around, like whether you’re swiping side-to-side, or up and down, or closer and farther from the screen. It probably won’t be able to figure out where your hand is if you aren’t moving it, however.

The coolest part of this is that it allows for high-tech gesture sensing, albeit a somewhat less accurate version of it, without any kind of hardware that isn’t already standard in a computer. At the same time, it’s kind of ludicrously useless. In the demonstration video, you’ll see several users awkwardly using up and down motions to jerkily scroll a webpage, despite the fact that there are buttons for that on the very keyboard they are waving their hand above, buttons that arguably do the job much better. Or like, you know, a touchpad.

Of course, this is a similar issue you run into with things like Kinect. “Sure, this is neat, but I’ve got this controller over here that does the job just as well if not better.” The advantage SoundWave has on this front is that since it doesn’t require any specialized hardware, it’s not like you’d really have to buy-in to play with this little triviality, and it could be there for devoted or specialized users to figure out a clever way to make use of it.

There’s no word on what will actually happen with the tech, but if it were to just show up in future iterations of Windows, I don’t think anyone would complain. I’d love the opportunity to play with gestures a little more, but not enough to spend so much as one nickel on new hardware. I’m sure I’m not the only one out there that feels that way, and SoundWave seems like the perfect thing for all of us.