Touché from Disney Research Turns Everything into Touchscreen | The Mary Sue

Disney Research’s “Touché” is Touch Control on Another Level 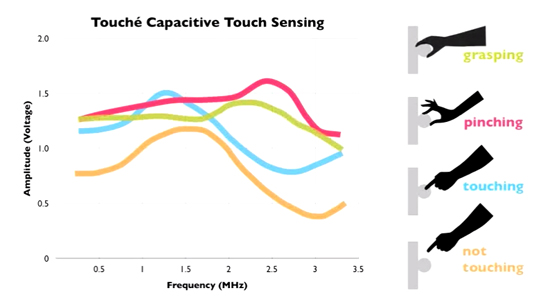 Or in this case, multiple frequencies. Touché, from Disney Research in Pittsburgh, Pennsylvania, is a project that explores what they’re calling “a novel Swept Frequency Capacitive Sensing technique” that would allow objects to sense multiple different touch gestures. By objects, they mean humans, liquids, sofas and just about anything else you can touch. Hello, Minority Report.

It all comes together due to capacitive sensing, which is when, as New Scientist says, “an electrical signal passing through [an] object changes when touched by a conductive material[.]” Traditional touchscreens that are currently used in things like smartphones and tablets are already using a minor form of this technology. Their capacitive sensing is limited only to a single frequency. Touché, on the other hand, functions across multiple frequencies to allow for more complicated gestures.

Though its usefulness might not seem immediately apparent, the group behind the project and research paper — Munehiko Sato, Ivan Poupyrev, and Chris Harrison — have provided a video that demonstrates exactly the kind of things that are already possible with the technology as presented. They even go so far as to ruminate on potential future implementations.

Though a klaxon sounding when you touch cereal with your fingers is clearly the best way to utilize this technology, there are a multitude of ways this could further enhance our lives. With wireless capabilities such as they are, everything and anything electronic could easily be hooked to the same system. Imagine: No more remotes at all. Instead, there could be a series of gestures for everything in your entertainment center.