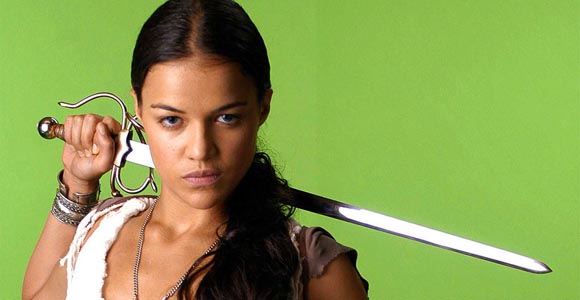 When we first heard an all-female Expendables type film was in the works, Michelle Rodriguez was one actress a lot of you said was a must-have. Rodriguez disagrees. She says she doesn’t have enough action film experience under her belt yet to which we say, “ORLY?”

The actress was recently interviewed by Judao.com about the possibility of taking on such a role. She replied:

I think it’s impossible right now for somebody like me because there’s so much…you know, [Sylvester] Stallone, Bruce Willis, and Arnold Schwarzenegger…they have 20, 30 movies to look back on and make fun of in their movie Expendables. And that’s what I think Expendables is, it’s like the Tropic Thunder of making fun of what we did. You know, it’s taking a walk in the museum and pointing at things and laughing with an audience that has shared this with you and it’s a beautiful thing. But I don’t think I’ve done enough to go there and look at the museum. I think I need another ten years before I’m ready to make fun of myself.

A very respectful answer to be sure. And yes, if you’re comparing yourself to the illustrious careers of people like Stallone and Schwarzenegger, you’re bound to come up short but that doesn’t mean you don’t have your own impressive resume at 34 years old. Shall we?

Not all Oscar worthy of course (though you could say the same about the fellas) but that leaves something to make fun of!

There’s still hope if you ask me. We have this all-female Expendables-like film being developed by Adi Shankar’s banner, 1984 Private Defense Contractors, but we also have the director of the last Expendables film showing serious interest in adding women action stars to the next installment of the franchise.

“I like the idea of the Expenda-Belles where it’s seven or eight women mercenaries,” said Simon West. “It would be Angelina Jolie, Cameron Diaz, Milla Jovovich, the list goes on. Helen Mirren, Jamie Lee Curtis would be great.”

So what do you think? Does Rodriguez have it right? If so, which female action stars actually have a list long enough to make the cut?