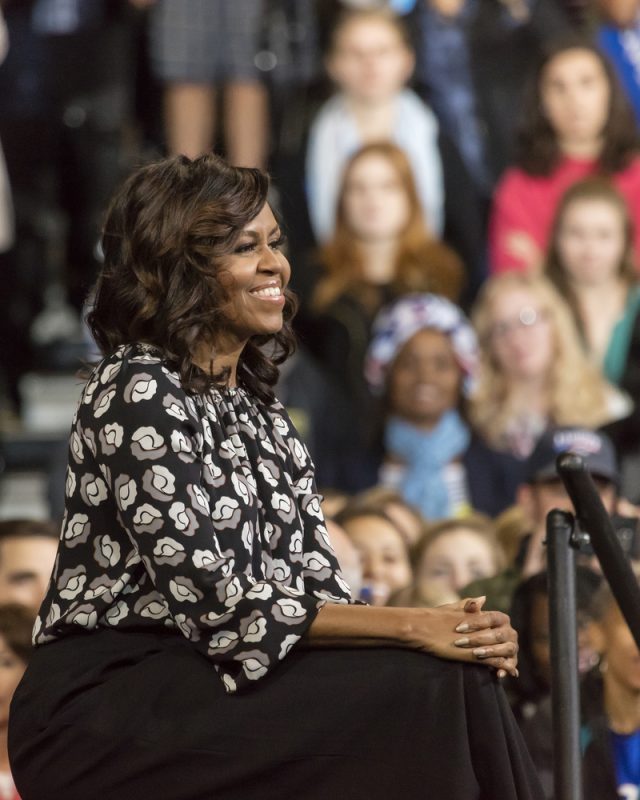 Last night, former First Lady Michelle Obama was invited to a conversation being hosted by the Women’s Foundation of CO to celebrate its 30th Anniversary. She inspired a crowd of 8,500 while speaking frankly about issues of race and gender.

The event was held at the Pepsi Center in Denver, the same venue where she spoke at the 2008 Democratic National Convention. Moderator and WFCO President Lauren Casteel said that Obama broke a glass ceiling when she became the first black First Lady, then asked her which of the shards that fell cut the deepest.

“The shards that cut me the deepest were the ones that intended to cut,” Obama replied. “Knowing that after eight years of working really hard for this country, there are still people who won’t see me for what I am because of my skin color.” She talked about the times when she was called things like an “ape in heels,” and other insulting things about her body, which reduced her not only because of her race, but because of her gender.

However, while Obama has long since moved beyond those ignorant comments, she wants to ensure that people know how much they hurt, because she doesn’t want to let those who made comments like that off the hook for their actions. She wants them to know the damage they cause.

And speaking of shattered glass and cuts, Obama reminded women that they are very capable of enduring so much, and that they need to trust that strength, urging them to “Seize your power and don’t let go.”

“Women, we endure those cuts in so many ways that we don’t even notice we’re cut,” Obama continued. “We are living with small tiny cuts, and we are bleeding every single day. And we’re still getting up.”

Obama didn’t really get political throughout the event, choosing to focus instead on the women in attendance, and the future of the girls in attendance, but she did want to remind those in the audience that, in spite of what it might feel like, that this country is full of better people than anyone might think:

“The people in this country are universally good and kind and honest and decent,” she said. “Don’t be afraid of the country you live in. The folks here are good.” Obama reminded the crowd that the United States is still very young, and still learning, but that we will grow and learn from our mistakes.

With women like Obama continuing to pursue a life of public service (though sadly, not elected office) and inspiring others, I have little doubt that we will.