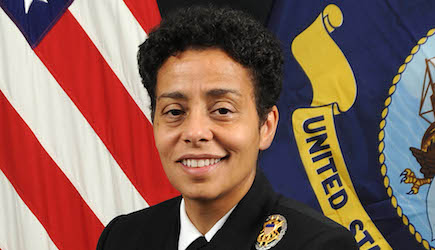 This Friday President Obama nominated Vice Admiral Michelle Howard for her fourth star, meaning that, pending Senate approval, she will become the first female full admiral in US Navy history.

“Someday, sure, there’ll be a woman [Chief of Naval Operations],” she told Time Magazine 14 years ago, while commanding the USS Rushmore, a post that made her the first African American woman to command a US Navy ship, “It will happen of its own accord.” Obama’s appointment would have her serving as Vice Chief of Naval Operations, one step away from the top ranking officer position in the service.

Howard is quick to point out that she represents two minorities in the armed forces, women and African Americans. “For some of the sailors,” she told Time in 2000, “[my command of the USS Rushmore] was a big deal—not because of the woman thing, but because of the African-American thing. I literally had people coming up, wanting to have their picture taken with me—this is the first time this has happened, where a minority woman has had command of a ship.” She said that she finds life within the service to hold less encounters with racism than without, but the reverse has been her experience with sexism. “Maybe that’s because we started to integrate the officer corps starting at the end of World War II, as far as race was concerned.”