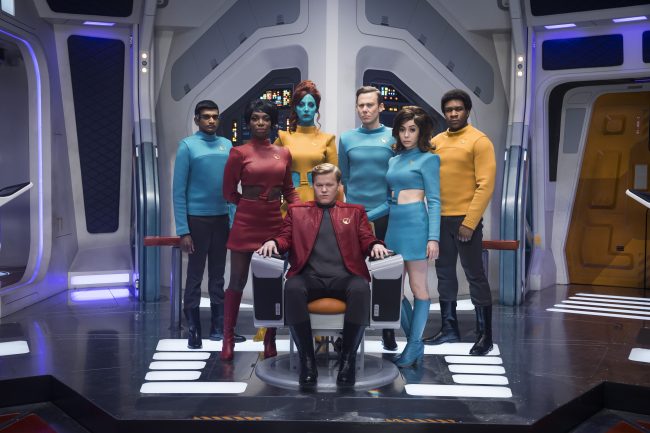 Happy Black Mirror Day, everyone! New episodes of Charlie Brooker’s amazeballs anthology series dropped on Netflix today, and there are a lot of awesome stories to look forward to, each one with a female protagonist! Chewing Gum‘s Michaela Coel stars in an episode called “USS Callister,” which is both a Star Trek parody, and a frightening glimpse at the harm that male entitlement can inflict on, well, everyone.

In an interview with Refinery 29, Coel talks about how ambitious the episode is, successfully so, but that it didn’t make her 1960s-style mod outfit any more comfortable.

“The eyelashes weighed a tonne, each,” she says. “The costume was no respecter of your bladder. If you needed to pee it was like, well, you should have done that an hour ago.”

Coel seems to love that Black Mirror forces us to be more thoughtful about our relationship with technology. “No one actually thinks about what is the future of technology; we just blindly go ‘Oh iPhone X, let’s get it!’” she says. “And [Brooker is] going: ‘Enjoying your toys are you?’ It does uncover a subconscious anxiety that we have.”

There is apparently anxiety of a different sort in “USS Callister,” which starts off seeming like the story of a dude named Robert Daley (Jesse Plemmons), a coder whose naturally submissive personality is constantly overpowered by his cocky business partner James Walton (Jimmi Simpson). According to Bustle:

“In order to make up for the emasculation he’s subject to at work, Daley has constructed a fantasy world inspired by his favorite show, the Star Trek-inspired Space Fleet, which he can plug into on his own time. In that reality, he’s the captain of a crew composed of his coworkers. He’s virile and respected — a shot-caller with a ‘70s hero cadence that would make William Shatner blush. But this “game” is revealed to be more sadistic than it appears. His crew are not simulations, but rather clones of his colleagues with the same memories and personalities. They retain their free will, too, but Daley will dole out horrific punishments to anyone who refuses to play along. He has essentially enslaved the people who, in his estimation, have neglected to respect him as a man.”

It’s then that we discover the true protagonist of the story, a coworker of his named Nanette Cole (Cristin Milioti), from whom Robert wants sexual attention and punishes when she doesn’t want to give it. It’s sci-fi and tech through the lens of #MeToo.

The Bustle piece goes well into spoiler territory on the episode, so beware there.

Have you watched any of Black Mirror yet? What do you think of this most recent season so far? Tell us in the comments!