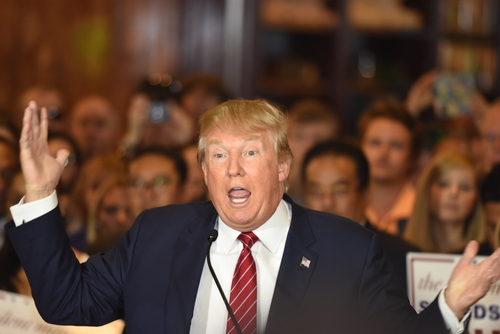 Hey! It turns out there are still consequences for lying! I know we were all trying to adjust to our new reality in which, well, there’s no such thing as reality, but we might not have to! Former Trump National Security Adviser Michael Flynn has been charged by Special Counsel Robert Mueller’s team this morning with lying to the FBI. Uh, sorry. Old habit. I meant: Things still matter, apparently!

This is rich on so many levels, the most obvious example being Michael Flynn’s leading of a “lock her up” chant about Hillary Clinton (1:12 mark):

Reminder: Flynn chanted “lock her up” at the RNC, said “If I did a tenth, a tenth of what she did, I would be in jail.” pic.twitter.com/AQY79rlzhm

There’s also Donald Trump’s own words, coming back to bite him as usual. He once tweeted, (delightful emphasis mine): “Crooked Hillary Clinton lied to the FBI and to the people of our country. She is sooooo guilty. But watch, her time will come!”

Unlike the charges against Trump Campaign Manager Paul Manafort, the lies Flynn has been charged with occurred while he was working in the White House. It wasn’t before he began working with Trump (when he already ran into plenty of trouble) or even during the campaign, but in his capacity as a working member of the White House that he committed his crime. Specifically, he lied about the content of his December, 2016 conversations with Russian Ambassador Sergey Kislyak. (You can read the charge in detail here.)

But aside from how this feels like the holidays have come early, what does it mean in context? On the whole, it doesn’t look good for Trump, who reportedly learned the news the same way the rest of us did, because he’s running short on friends. The timeline of events surrounding Flynn’s actions look very bad from an obstruction of justice perspective:

This timeline is so damning for Trump:
January 24 – Flynn lies to the FBI.
January 26 – Yates warns the WH.
January 27 – Trump responds not by firing Flynn, but asking Comey for a loyalty pledge.
January 30 – Yates fired.

Trump’s efforts to get James Comey to drop the Flynn investigation, along with Comey’s own subsequent firing, were the reason Robert Mueller became special counsel in the first place. Worse for Trump—if he’s not just a justice-obstructing moron but also a guilty party in relation to Russia’s election meddling—Flynn’s expected guilty plea, along with the relatively small charge in relation to what Mueller could have charged him with, could very well mean that he’s given up useful information to help Mueller’s team nab someone higher up the ladder.

Get out your Fantasy Indictment cards!

Remember that time Donald Trump had a whole show about how he was great at grooming “apprentices,” or the time he ran his presidential campaign, in part, on the idea that he only associates with the best people in order to make up for his lack of experience? Weird. It’s almost like the entire idea that he’s good at any of this is nakedly absurd.

JUST IN: @BrianRoss on @ABC News Special Report: Michael Flynn promised “full cooperation to the Mueller team” and is prepared to testify that as a candidate, Donald Trump “directed him to make contact with the Russians.” https://t.co/aiagnvr8eS pic.twitter.com/r8u2LWAd0O