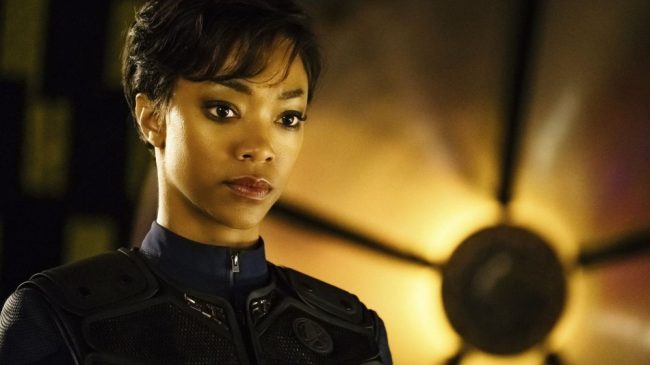 Names have power: just ask Rumpelstiltskin. As someone with a longstanding interest in the meaning of names, the first thing that caught my attention while watching Discovery was that the First Officer played by Sonequa Martin-Green has a traditionally masculine name. I had to know more.

I assumed—erroneously—that Martin-Green’s part was written with a man in mind and when she was cast, they decided to keep the original name for the hell of it. But according to TV Guide, this was not the case. The idea for the name originated with Discovery‘s former showrunner Bryan Fuller, who exited the project but co-wrote the pilot episode, “The Vulcan Hello.” Fuller has a history of giving his female protagonists masculine-sounding names: “See: Dead Like Me’s George (Ellen Muth); Pushing Daisies’ Chuck (Anna Friel); and Wonderfalls’ unisex Jaye (Caroline Dhavernas).”

Discovery executive producer Aaron Harberts described naming lead women with male-associated names as Fuller’s “signature move,” calling it “a motif.” Harberts himself came up with “Michael,” explaining in an interview that he “pitched the name after thinking of female columnist Michael Sneed, who writes for the Chicago Sun-Times, and The Bangles’ bassist Michael Steele.” He added, “And, of course, an archangel is named Michael as well, and it just had a lot of potency for us.”

Michael Burnham is hardly the first female Michael in pop culture, and she’s not the first woman to sport a gender-ambiguous name on Star Trek, where officers are often referred to by their last names. “Dax” is a much more recognized moniker among fans than “Jadzia,” for example. But that still doesn’t stop me from noticing every time Martin-Green’s character introduces herself or is called by her full name, because the name stands out even as she stands next to aliens aboard a starship. Michael herself is a fascinating character, fearless and brilliant from what we’ve seen of her so far, caught between her Vulcan upbringing and her human emotions.

Actress Sonequa Martin-Green was enthusiastic about the name, liking the symbolism and anticipating a more gender-fluid and equal opportunity future. Of Michael, she said: “I appreciated the statement it makes all on its own to have this woman with this male name, just speaking of the amelioration of how we see men and women in the future.”

Martin-Green gave Michael’s name a special history that we may end up exploring with her on-screen. “I also just decided for my creation and for my background and whatnot, that I was named after my father. And so, we get a little bit of exploration of the father‑daughter dynamic … I think it’s a lovely symbol.” After all, considering the centuries-long tradition of the eldest boy inheriting their father’s first name, why shouldn’t a girl?

On the flip side, it would be interesting to see the reception of a lead male character with a firmly female-associated name. (Look at how often Firefly’s Jayne, an ensemble member, is made fun of for his name). Because as much as I love Martin-Green rocking the hell out of “Michael,” that’s partially the thrill of seeing a woman of color own both the lead part for the first time on Star Trek and assume another badge of cultural power—the inherited name of the patriarch. But some men with traditionally unisex names that have come to be thought of as more “female”—think Stacey or Alexis —report being teased for this attribute, because in the patriarchal culture we’ve all been raised in, the association with femininity is something to mock in a man while simultaneously undervaluing women (“you throw like a girl”). Why can we take Michael Burnham seriously, but would never see Jason Isaacs’ character introduce himself as Captain Susan Lorca?

I’m looking forward to the far more gender-fluid future where gendered stereotypes lose ground, and anyone can be named anything that they damn well please, though we’ll still have to grapple with the cultural weight of names. Names have an impact all on their own, and it is often centered around gender and race. I would be far more likely to have a manuscript accepted for publishing if I used a male or gender-neutral pen name. Names conjure racist fears and discrimination from thin air: “[a] study of mostly white participants shows that men with black-sounding names are more likely to be imagined as physically large, dangerous and violent than those with stereotypically white-sounding names.” People with perceived “ethnic” names are much less likely to be interviewed or hired for a job than people with “white” names, even when their resumes are identical otherwise. Names have power.

If you’re curious, the meaning of the name “Michael” is a rhetorical question: “Who is like God?” with the implied answer that no one is, so there is no answer. Michael is also a powerful archangel, the leader of God’s armies against the forces of Satan—and one of two archangels named in both the old and new Testament. The other archangel? Gabriel, which just so happens to be the first name of Jason Isaacs’ Captain Lorca. I’d like to imagine that from this Biblical symbolism, Star Trek: Discovery has some epic stories in store.