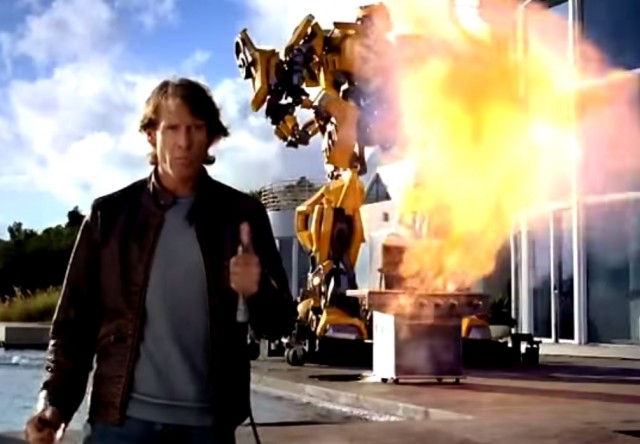 We’re dangerously close to unlocking the connection between explosions and junk food consumption! Junksplosion! Wait, I don’t like how that sounds… A new study into how the things you watch affect the things you eat has revealed that Michael Bay-style explosio-ganzas cause you to eat more junk food than other types of entertainment.

The study that brought these revelations was published just days ago in the Journal of the American Medical Association: Internal Medicine. Yes, an intense scientific inquiry was launched into whether or not Michael Bay movies will make us fat.

Researchers from Cornell and Vanderbilt universities gathered groups of up to 20 undergraduate students and exposed them to 20 minutes of TV programming of 3 different varieties: Michael Bay’s The Island, a soundless version of the same clip from The Island, and a clip from Charlie Rose. I’d be interested to see what the outcome was with longer periods of time, but I understand that it must have been hard to ethically justify subjecting young minds to more than 20 minutes of The Island.

Presented with four different, common foods, the viewers wound up eating nearly twice as much food when watching The Island complete with its explosion sound effects (98% more food than those watching Charlie Rose). In the soundless version, without all that bass, the increase in food consumed was only 36% compared to Charlie Rose. In both of the Bay tests, participants also tended to consume more caloric food.

Cornell’s Aner Tal, coauthor of the study, suggested the reason to CBS News: “More stimulating programs that are fast paced, include many camera cuts, really draw you in and distract you from what you are eating. They can make you eat more because you’re paying less attention to how much you are putting in your mouth.”

There you have it: Science says Michael Bay movies basically turn you into a mindless zombie. Although, I have an alternate hypothesis that it’s just people eating their feelings over what his movies do to their childhoods.