True Life: I Was A Babysitting Dinosaur

Nobody leaves this place without singing the blues. 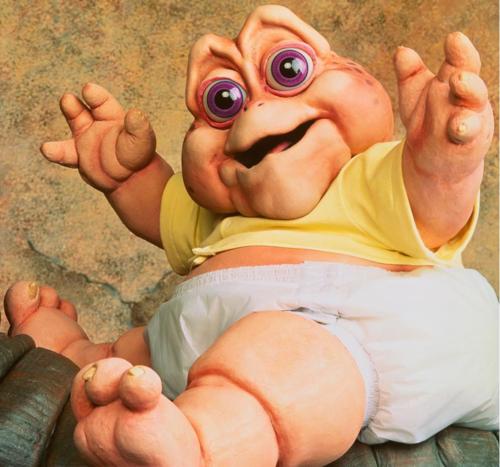 As a young, money-grubbing middle schooler, I experienced a lot of babysitting-related anxiety. What if I dropped the kid on his head? What if it choked on some Yoplait? What if an unnamed global catastrophe rendered its entire species extinct? For one babysitting dinosaur, the nightmare was real.

In a recent study published in Cretaceous Research and led by University of Pennsylvania’s Brandon P. Hedrick and Peter Dodson, a team of researchers re-analyzed a two-feet across, 120 million year old specimen containing 25 psittacosaurs fossils. A brief paper on the remains was published back in 2004, but Hedrick says he “saw a photo of it and instantly knew I wanted to explore it in more depth.” By examining samples of rock from the specimen, the team determined that the dinos were likely caught in lava from a volcanic eruption. Says Hedrick,

They were likely trapped by a flow, though we can’t say exactly what kind of flow. It certainly seems like it might be a nest, but we weren’t able to satisfy the intense criteria to say definitively that it is.

The specimens’ skulls show that 24 of the 25 psittacosaurs were likely recently hatched, with one skull indicating that a 4-5 year old dino was also present. Since P. lujiatunensis  aren’t thought to have reproduced until they reached 8 or 9 years old, the evidence indicates that the younger dinosaurs may have been watched by a juvenile, which could point to post-hatchling cooperation, a behavior seen in modern-day birds.

Judging from the positions in which the specimens were fossilized, it appears the babysitter stayed with its charges even to the bitter end. Says Phys.org,

Two of the younger animals were in fact intertwined with the [babysitter] skull, signs that the animals were closely associated at the time of their death.

I hope she at least got to steal some good snacks from the parent’s fridge first. And some Cretaceous-era cable.

Previously in did you check on the hatchlings?