Here’s How the U.S. Is Messing Everything Up in Texas

I know where Trump can stick that "thumbs up." 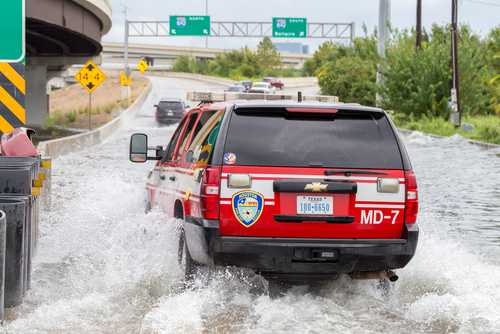 As Hurricane Harvey continues to pound on the city of Houston and all of southeast Texas, the Mexican government has offered to aid the state and its beleaguered citizens in their evacuation and recovery efforts. That’s right: Mexico, the same Mexico that our sockpuppet-in-command wishes to wall off in quite possibly the worst-conceived plan in the history of ever, still wants to help the city of Houston.

The aid was offered in a call from Mexican Foreign Minister Luis Videgaray to Texas Governor Greg Abbott, who said they want to help “as good neighbors should always do in trying times.” As well, the Mexican Secretariat of Foreign Affairs issued a statement, saying, “The government of Mexico takes this opportunity to express its full solidarity with the people and government of the United States for the damages caused by Hurricane Harvey in Texas.”

Carlos Gonzalez Gutierrez, the Mexican consul general in Austin, Texas, referenced Mexico’s past efforts in aiding the United States after previous disasters. He said, “As we have done in the past, Mexico stands with Texas in this difficult moment.” Keep in mind that Mexico brought aid, food, water, and troops to help the U.S. when Hurricane Katrina ravaged New Orleans in 2005.

Here, the U.S. government’s response to Hurricane Harvey has been nothing but a pile of miserable errors, each made one after the other, amounting what feels like a completely different storm in its own right.

For starters, many Houstonians found themselves desperately in need of rescue after being told by their local government officials that they should merely shelter in place. Such advice came on Friday after Gov. Abbott “strongly encouraged” Houston residents to begin evacuating as soon as possible. It was clear by then that Harvey would end up submerging nearly the entire city of Houston, yet local officials felt they knew better, advising the contrary to Gov. Abbott. The order for mandatory evacuation comes only today, three days after Harvey first made landfall. Such a delay is nothing short of negligent on the part of local officials, to say the absolute least. At worst, such harmful advice may very well be thought of as responsible for the several deaths that have been reported thus far.

At the federal level, Trump signed an executive order revoking an Obama-era order that aimed to help institute better flood protections for infrastructure across America, requiring that roads and bridges be built on safer ground. The intent for that order was such that it would help the country’s infrastructure stay intact in the face of climate change and climate change-related disasters (which Harvey could arguably be). The reasoning behind Trump’s revocation of Obama’s order was, according to Newsweek, an attempt to reduce the time it takes to approve new infrastructure projects, most likely so that the administration can say that they accomplished, well, anything here in the first three quarters of this year—you know, aside from managing to mobilize and all but outright approve of prejudice and hatred. But I digress.

Where were we? Oh, right, we were talking about how badly this administration fucked up their response to Harvey. Great.

Ahead of Harvey’s landfall, Immigration and Customs Enforcement (ICE) ensured that immigration checkpoints would remain open throughout the state. So rather than expediting and aiding in the evacuation of Houston, ICE basically forced some people to second guess evacuating from a literal god damned hurricane for fear of being deported. ICE’s recent headlines have revealed an overzealous agency bent on deporting people on technicalities, and rather than risk time in a deportation camp and a forced flight elsewhere, many Houstonians were left without anywhere to go. Eventually, the U.S. Customs and Border Patrol shut down the checkpoints, but by then, Harvey had already made landfall.

In addition to that heinous move, ICE agents abandoned a busload of 50 asylum-seeking women and children at a San Antonio Greyhound station. The aim was to drop them off at the station so they could all make their own way home to families on Greyhound busses, but Greyhound had already canceled all bus trips by the time the families were dropped off. In a statement, ICE spouted some boilerplate about being in contact with the bus depots to make sure people could make it on time (except they clearly weren’t, and they clearly didn’t), and they “kept two additional families in custody since their bus trip had been cancelled.” Ultimately, those 50 asylum seekers were offered shelter by the Interfaith Welcome Coalition and a local church.

In the days leading up to Harvey’s landing, Trump had done nothing to lend confidence or strength to the people of Houston—not even the token “thoughts and prayers” lip service that any actual President should be able to do in their sleep. Instead, what he offered was a thumbs-up and a “good luck.” Trump’s also been more than talkative about the storm itself on Twitter, but has said nothing about the victims themselves.

If his and his administration’s unpreparedness in the face of natural disaster isn’t enough to prove just how incompetent and nigh-destructive they are, then I’m honestly not sure what more it would take. I don’t mean to undercut or understate the efforts being made by the National Guard or any governmental bodies actually doing work in Houston, but Trump and his administration could not possibly be any further removed from this tragedy, thanks to their obvious inaction and woefully unprepared response.

I’m not much for divine intercession or tempting fate, at least when it comes to political matters (they are, after all, problems to which we have all contributed, in some small or large way), but I find myself still anxious over wondering what possible disaster it would take for the GOP and all of their henchpeople and citizen goons to realize just what’s going on here. I shudder to think what would bring about such a paradigm shift, because if they aren’t even close to coming around already, then just where the hell have they been, exactly?