Weather Channel Co-Founder Tells Fox News Global Warming Is a Myth, Says Polar Bears Are “Happier” Than Ever Before

100% chance of eye-rolling, with some possible head-to-desk movement in the late afternoon. 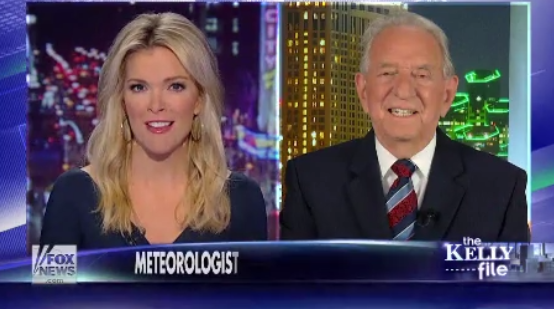 On Monday night, meteorologist and Weather Channel co-founder John Coleman sat down with Fox News host Megyn Kelly to “come out” as a skeptic of global warming and play the world’s tiniest violin for climate-change deniers everywhere.

During his interview (you can catch a clip over on Huffington Post), Coleman railed against what he described as “the incredible, bad, bad science” behind man-made climate change, a stance he first took in an open letter published earlier this month:

A climate skeptic can rarely get on TV ever since Al Gore made it a plank of the Democratic Party … it’s a tough go for people who don’t believe in climate change. […] There is no significant man-made global warming at this time […] It’s very difficult for anybody to be against it, because the media has told the nation over and over again, day after day for 20 years that the oceans are rising, the polar bears are dying, the ice is melting, that storms are going to sweep the earth and that we’re all going to die of a heat wave.

Later on in the interview, the meteorologist also assured Kelly that “more polar bears are alive and happy” today than ever before.

Despite Coleman’s valid concern that media attention can sometimes overshadow scientific evidence to harmful effect (man, wouldn’t it be cool if Fox was this committed to scientific integrity in its ebola coverage?), it’s pretty hard to have sympathy for his plight as a climate change skeptic. As far as minorities go, I’m about as concerned for climate change deniers as I am for Marvel actors named Chris or, you know, men in gaming.

But yeah, I really wish crackpots like NASA would stop spreading their “bad, bad science” everywhere. Rise of sea levels is now “unstoppable”, you say? Pshaw. What has NASA ever accomplished, really? Stop ruining things for those happy, populous polar bears, you rocket scientists, you!