We’ve been witnessing Princess Merida’s skill with a bow for a while (and even seen a real-life redhead doing the same) but now we know she’s a very well-rounded lady. Disney-Pixar released two new stills from Brave that show she’s also quite good at swordfighting. Hit the jump for the other new shot.

Personally, I’ve always been a fan of bows and arrow and swords so combine that with the fact that I already have Merida hair and these new pictures have me doing the Kermit flail. 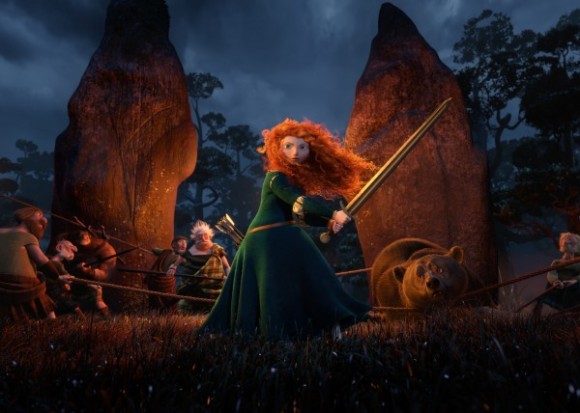 You’ll also take note of the bear in the background of this one. The film was called Bear and the Bow for a while but we recently found out that wasn’t actually the original title like we previously thought. “The title from the very beginning was Brave, so Bear and the Bow was actually a later detour and then we came back to Brave,” said producer Katherine Sarafian. “I think we are being careful not to give away too much about what happens later in the film, but I think we are teasing it when you see shots of bears and chases. There’s big action and we are trying to tease that, so people know that they are going to be getting a lot of different stuff.”

Our own Susana has a theory on the bears, which I’ll put under our handy spoiler tag in case you don’t want to read it. Susana thinks the bears are actually Merida’s family bewitched under some curse or spell and I think there’s a good chance she’s right.