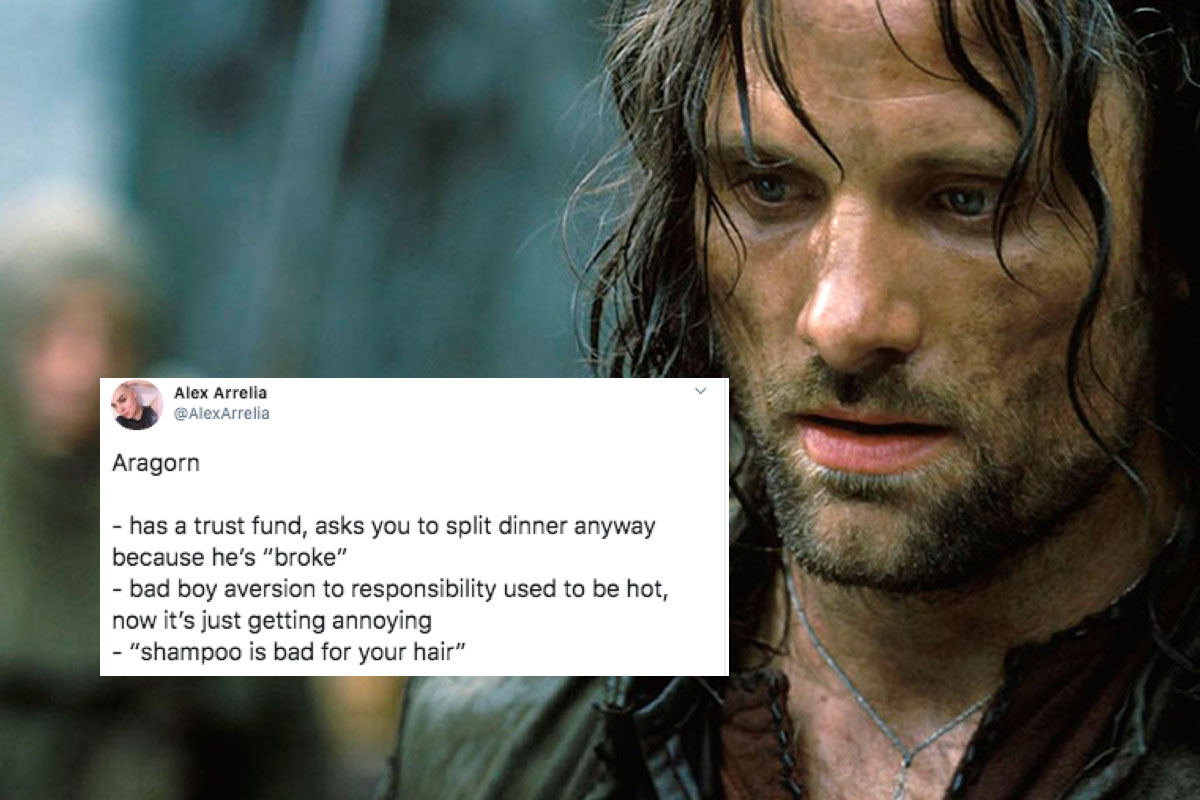 Every now and then, a Twitter act of creation reminds us that good things can still emerge from our hellish Internet stomping grounds. Such is the case with a viral thread from writer Alex Arrelia, in which Arrelia painstakingly—and hilariously—takes on J.R.R. Tolkien’s characters under the heading of “Men of Middle Earth as bad ex boyfriends who ruined your life.”

Fuck it. I’m doing it: Men of Middle Earth as bad ex boyfriends who ruined your life:

This is all in good fun, but the brilliance of the thread is in its co-mingled knowledge of both Tolkien characters and human nature. These labels attached to Middle-earth heroes and villains and Ents work so well because they play on the characters’ inclinations alongside recognizable modern types we may have met (or dated). Arrelia was kind enough to give us permission to feature the thread here, so let’s dig right into this tasty second breakfast:

– has a trust fund, asks you to split dinner anyway because he’s “broke”
– bad boy aversion to responsibility used to be hot, now it’s just getting annoying
– “shampoo is bad for your hair” pic.twitter.com/i8NaEsQUF5

– really affectionate, but if you don’t text back he melts down
– won’t let you buy non-organic produce
– his best friend is your best friend now, you’re the third wheel on all your dates pic.twitter.com/tZ5jaHOOok

– will not tell anyone you’re dating so he can keep his options open
– steals your hair products
– complains when he sees girls wearing Thrasher tees pic.twitter.com/wLiE1i4OUU

– used to be fun but you never leave the house anymore
– if you talk during a football game you’re dead to him
– enormous family who won’t stop asking when you’re going to have kids pic.twitter.com/AAmF2qKQhB

– only drinks craft beer and he will not shut up about it
– has confused brooding with having a personality
– not so much a “boyfriend” as the hot mistake you keep making over and over and over… pic.twitter.com/AcOvxfuCxh

– more baggage than the overhead compartment of a 747
– really sweet but cannot get his shit together
– all that vanilla sex is starting to get real boring pic.twitter.com/e5jUMO0n5X

– complete burn out
– banter is fun only until you realize your entire relationship is based on antagonism
– he is going to get you into serious trouble one day pic.twitter.com/FRNvTCctdf

– secret artistic side kinda not making up for what a clown he is
– caves instantly to peer pressure
– you can’t leave him unsupervised for like a second pic.twitter.com/bScmy2mSoN

– horrible combination of inferiority complex and fragile ego
– has never heard the word “no”
– really, really thinks getting married will fix your relationship problems? pic.twitter.com/gXKTudqRsx

– doe-eyed schtick is getting tired
– complete layabout who’s never worked a day in his life
– estimation of his own moral superiority is somehow both unshakeable and totally unearned pic.twitter.com/u71R2yw8TM

– ghosts you exactly when you need him most
– probably in a crappy prog rock band, keeps “reinventing” himself
– “weed sommelier” pic.twitter.com/xsHOcwk2b5

Not to be limited by the famous characters many of us know from the Lord of the Rings books and films, Arrelia also ventured into more obscure and secondary-character territory on this adventure through Arda.

– there are only so many hours in the goddamn day
– serves you mushrooms of suspect providence
– no seriously, what happened to your ex wife? You “lost” her? I’m gonna need you to be a lot more specific, bud pic.twitter.com/qHcIbhABDw

– on again, off again bc he lives for drama
– backhanded compliments
– influencer who keeps mining your relationship for content pic.twitter.com/P4A2xtxfg0

– dude…that was kind of racist
– orders for you at restaurants
– never apologizes ever, for anything, even if it’s his fault pic.twitter.com/X1CvsvLFMF

– daddy dom well dried up
– not worth having to sit through another monologue about how “music today is all beeps and boops”
– performance in off-broadway production of Hamlet left a lot to be desired pic.twitter.com/HOA5JYG9W8

– terrible table manners
– no
– why would you ever? pic.twitter.com/7nmc07zEcA

– he is definitely going to steal your wallet one of these days
– does not want you to have any friends
– will not stop talking about himself in the third person pic.twitter.com/otuMbkKov5

– Spends way too much time on Reddit
– has a PHD in philosophy, and works it into every conversation
– is absolutely cheating on you pic.twitter.com/jyxI8lm3IE

– more of an ill-advised fling you had on vacation
– works in investment banking
– turns out he’s married pic.twitter.com/8jT3PA6Ym3

– allergic to fun
– thinks you need to “broaden your horizons” so he wants you to read Kerouac
– Calls himself a self-made man even though he inherented the house pic.twitter.com/8xiMm0eqKh

– 100% gaslighting you
– has never changed the sheets, ever
– “Name five of their songs, poseur” pic.twitter.com/jjLB1lI8n2

– despite obvious predilection for gender-bending, doesn’t respect anyone else’s pronouns
– listens to screamo at ear splitting volumes
– won’t post photos of you together on Insta bc you’re bad for his aesthetic pic.twitter.com/aHpF9pZFyO

– historical figure he relates to most is Lord Byron
– needs constant reassurance that he’s hotter than your exes
– won’t just come out and call you a gold digger, but he’s thinking it pic.twitter.com/Y2O8w0ZYmq

But Thorin wouldn’t actually be Arrelia’s last request, as The Hobbit still has an active fanbase, and there was clamoring for further analysis therein.

– when you try to make plans, he says “whatever you want do”, but absolutely does not mean it
– can afford to tip, but doesn’t
– leaves you on read pic.twitter.com/ierBy4SuxO

– an absolutely prototypical fuckboy
– thinks his entire charm is his sense of humour, but is not actually funny
– sends unsolicited dick picks pic.twitter.com/hMV7V8IbVL

– manages simultaneously to be so handsome and so boring you forgot about him
– already in a committed relationship with his Bowflex
– you ran out of shit to talk about on your first date pic.twitter.com/I7jHzcb4Em

And last but ever vigilant, the Lord of the Rings himself:

– brags about belonging to MENSA
– manages several sock puppet accounts he doesn’t want you to know about
– kicked out of his own doom metal band bc he always plays with his back to the audience—but it’s not because he has stage fright, okay? pic.twitter.com/BsMdZq2RGY

The Mouth of Sauron:

As with any viral thread, there has been some trollish responses that Arrelia is handling with further humor and wit; you can also find more character-with-bad-boyfriend-conflation over on Twitter, if you were wondering about the likes of Celeborn, Everard Proudfoot, and Tom Bombadil in a relationship.

Of course, the examples of behavior that Arrelia gives may also apply to women and genderqueer folks in your life. But as Arrelia points out in another Tweet to address some of the angry replies, “‘You did a sexism by mocking this story with a thousand men and three women in it’ is a hell of a take.”

Yet the widespread popularity and overall enthusiastic embrace of this fun thread gives me hope. If we couldn’t delight in the gentle ribbing of beloved characters from epic fantasy literature, it would probably be time to pack up the Internet and call it a wrap.

I have never read a more accurate take on Tolkien’s mythos.
He may have hated people over-analysing and over-interpetting his work – but this he surely would have made canon. https://t.co/OfG2Sjakf2