Men of Hollywood, Where the F*ck Have You Been? | The Mary Sue

Men of Hollywood, Where the F*ck Have You Been? Firing Predators Is Only the Beginning 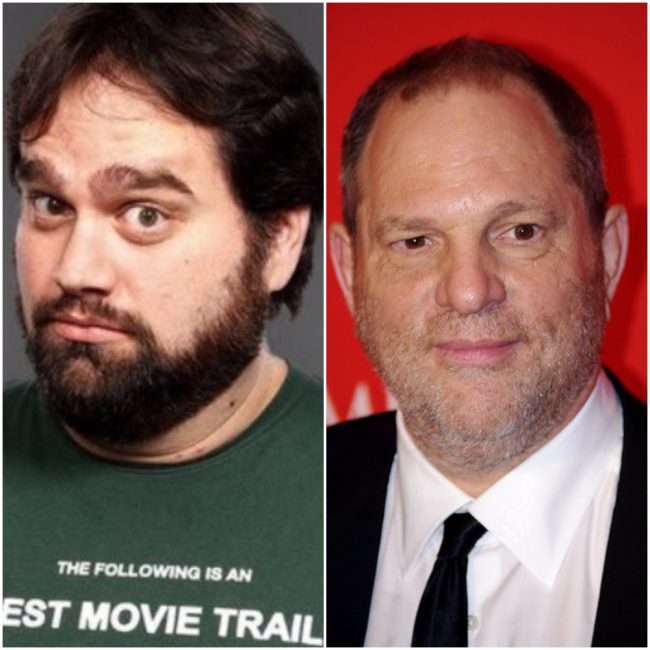 There’s been some good news coming out of the fight against systemic sexism in pop culture and media in the form of two notorious sexual predators being fired from the companies they helped build. However, as Rose McGowan would like to point out, this is only the tip of an enormous iceberg.

Over the weekend, The Weinstein Company’s all-male board of directors fired Harvey Weinstein from the company he helped found in response to the New York Times investigative story on Weinstein’s long history of sexual harassment and assault. The Times reports that, in a statement, TWC said that they made the decision “in light of new information about misconduct by Harvey Weinstein that has emerged in the past few days.”

Meanwhile, in online media news, Defy Media fired Andy Signore, the founder of their popular Honest Trailers series, after his alleged sexual harassment was made public. Here is a part of their statement, as reported by Business Insider UK:

“DEFY Media and Screen Junkies have today terminated Andy Signore’s employment, effective immediately. There is simply no justification for this egregious and intolerable behavior.

In August, DEFY’s HR team was made aware of allegations made against Andy, at which time an investigation was launched. On Friday, new information became available and the scope and magnitude of his inappropriate actions became apparent. We are acting swiftly to address the concerns of the people affected, and that going forward, our community is free of harassment or discrimination of any kind.”

Okay, so here’s the thing. Both of these companies, in their respective statements, specifically say that the reason these firings are happening now is because of information that’s come out recently. In other words, these men were not fired until the allegations against them were made really, really public.

Now, let’s be really clear. This information was not new. In both cases, the harassment and abuse was continuous and over the span of years. It’s impossible that no one other than these men and the women involved knew about what was going on. People talk, and these two men being abusers were open secrets in their respective communities.

Yet now, their companies are acting as though they had no idea that any of this was going on. That it took a New York Times investigative report and/or a woman posting her story on social media for them to understand the “scope and magnitude” of the problem. Bullshit. The information wasn’t new. The only thing that was new was how public it became. That is the thing that threatened these companies. The way in which these men’s reputations would tarnish the company brand.

They don’t care about women any more than they did before…they only care about how they look, and how that look will affect their bottom line.

Director, actress, and activist Rose McGowan said in an interview with The Hollywood Reporter that “Men in Hollywood need to change ASAP. Hollywood’s power is dying because society has changed and grown, and yet Hollywood male behavior has not. It is so not a good look. In the way cooler than Hollywood world I live and work in, I am actually embarrassed to be associated with it.”

She also points out the next necessary step if TWC and Hollywood as a whole really want to do better and make things right. “I’m calling on the board to resign effective immediately,” she says. “And for other men to stop other men when they are being disgusting.”

One TWC board member, Paul Tudor Jones, already resigned on Saturday, before the firing. Yet the other four members are still there. Make no mistake, it’s damn near impossible, when you consider the fact that Weinstein made eight different settlements with women over sexual harassment allegations, that they had no idea this has been going on. And if they really didn’t know, that ignorance about the man running the company they joined makes them really shitty board members. Either way, they don’t deserve to hold their positions.

For me, the most important piece is the other part of what McGowan said, about men stopping other men when they’re being disgusting. I understand why women sometimes don’t speak up, and why it’s brave when one does. In these situations, it’s the women who are on the losing end of the power dynamic. They are often not in decision-making positions, and have very few women in decision-making positions who can help them and have their back. Those women who are in decision-making positions have often been so battered by sexism by the time they get there, that they’re in pure self-preservation mode, doing what they need to do to hold on to the power they’ve got, because they have more to lose if they lose it.

Meanwhile men, both those with power and those on the lower rungs of the entertainment ladder, all look out for and protect each other, consciously and subconsciously, in order to protect their privilege.

A more detailed statement on the harassment I received from Andy Signore. pic.twitter.com/wVGwr8ATCa

When women went to Screen Junkies and Defy Media to complain about Signore’s behavior, where were they then? Why did it take a tipping point of bad publicity to do something about this? And how dare they pretend that it’s only now that they’re finding out about this. I’m sorry, but fuck you. You knew.

Where was Bob Weinstein, or the rest of the TWC board, or the board at Miramax, or literally any men in Hollywood over the thirty years that Harvey Weinstein was having meetings with actresses in hotel rooms? Did this strike no one as weird or inappropriate? Or were they secretly wishing they could do the same, silently lauding Weinstein for “living the dream?”

Men of Hollywood and the Online Media Space: where the fuck have you been? And if you really, somehow, unbelievably didn’t know, what the fuck are you going to do now? Because now? You fucking know.

Earlier today, a fan asked Kevin Smith on Twitter his thoughts about the Harvey Weinstein thing, a poignant question when you consider that Smith owes the entire beginning of his career to Miramax. He replied:

He financed the first 14 years of my career – and now I know while I was profiting, others were in terrible pain. It makes me feel ashamed. https://t.co/T0hInW7EqJ

Well, shame is a good start. Shame, and an acknowledgement of the fact that his entire career was built on sexism (I mean, that’s the case Weinstein or no Weinstein, but this is a most egregious example of it). But this shame and acknowledgement means nothing without action. In response to this, McGowan tweeted:

Call on the board to resign or you still suck https://t.co/aMqm9CZQxR

While I wouldn’t go that far (after all, at least he’s acknowledging the problem, whereas other male beneficiaries like Matt Damon, Ben Affleck, Quentin Tarantino, and Ryan Coogler have all been quiet), the point remains: what the fuck are you going to do now?

I’ve said this before and I’ll say it again: a lot of men seem to be very concerned about things like a “bro code” and “being a real man.” These men need to redefine masculinity.

When I say that a male, adult person should “be a man,” I mean that they should be someone who 1) takes responsibility for their actions like a mature, grown-ass adult, 2) works to create and protect the world around them rather than hurting and destroying them, and 3) understand, the way all adults should understand, that their actions don’t exist in a vacuum, and that everything one does has an impact on other people.

Those things apply to women as well. This is all any adult, functioning person needs to do. Take responsibility. Create and protect. Understand the consequences of your actions. It has nothing to do with “masculinity” or “femininity.” “Being a man” means being a goddamn adult, who happens to be male.

Don’t let fear and shame rule you. Instead, let it propel you into action. Not just “speaking up,” when stories like this come out, but take real, solid action even if no one is watching.

You see your boy talking to a drunk actress at a party? Make sure you check in to make sure she’s okay. You hear a rumor that your boss has a nasty habit of molesting, raping, or otherwise sexually harassing women? Don’t work with them. Confront them about it. Be willing to walk. You will be fine. You’re a man. You’re practically guaranteed work in this industry, and your only competition has ever been each other. Your fear of women “taking” what’s yours simply because they’re asking for equality is a misdirection. A sleight of hand, courtesy of Patriarchy.

Men of Hollywood: it’s time to actually be men, not just play them in the movies or on TV. Stand up for your colleagues of all genders, not just the ones who share yours.