Melania Trump Wears “I REALLY DON’T CARE, DO U?” Jacket en Route to Meet With Kids in Detention Center

When 'Be Best' goes bad. 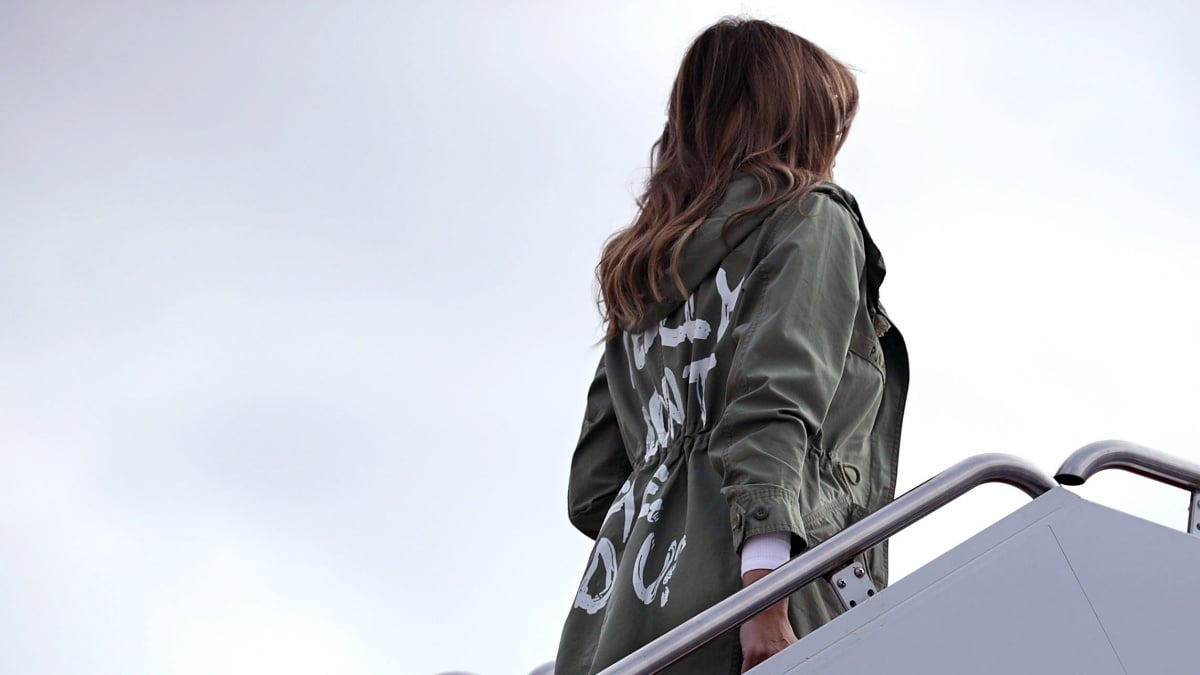 WASHINGTON, DC – JUNE 20: U.S. first lady Melania Trump boards an Air Force plane before traveling to Texas to visit facilities that house and care for children taken from their parents at the U.S.-Mexico border June 21, 2018 at Joint Base Andrews, Maryland. The first lady is traveling to Texas to see first hand the condition and treatment that children taken from their families at the border were receiving from the federal government. Following public outcry and criticism from members of his own party, President Donald Trump signed an executive order Wednesday to stop the separation of migrant children from their families, a practice the administration employed to deter illegal immigration at the U.S.-Mexico border.

Well, people wanted to find her, and here First Lady Melania Trump is: reminding us all that she decided to marry Donald Trump and any embarrassment she has suffered as a result is of her own doing.

Melania Trump took an “unannounced” trip to the Upbring New Hope Children’s Center in McAllen, Texas, which is currently holding 58 children aged 12-17, who have been separated from their parents.

Whatever good PR was hoped to be cultivated from this excursion was dashed when a report leaked that the First Lady wore a jacket with “I REALLY DON’T CARE, DO U?” on the way to visit said children.

The Daily Mail is reporting that Melania Trump wore a jacket that says “I really don’t care” on her way to visit immigrant children, as in a jacket that LITERALLY HAS THE WORDS “I REALLY DON’T CARE” WRITTEN ON THE BACK WHAT THE FUCK pic.twitter.com/vKkUFZDhpQ

Now, because the first source I saw for this was the Daily Mail, I was a little suspect about it. Surely someone, anyone, would have told Mrs. Trump that was a poor choice for attire. But I forgot that this is the darkest timeline and, indeed, soon the jacket was confirmed by Trump’s own spokesperson who said: “It’s a jacket. There was no hidden message. After today’s important visit to Texas, I hope this isn’t what the media is going to choose to focus on.”

NEW: @FLOTUS spokeswoman Stephanie Grisham when asked what message the first lady’s jacket intends to send: “It’s a jacket. There was no hidden message. After today’s important visit to Texas, I hope this isn’t what the media is going to choose to focus on.”

FLOTUS spox confirms Mrs. Trump wore a jacket to visit border kids that reads: “I really don’t care. Do you?” Spox says: “It’s a jacket. There was no hidden message. After today’s important visit to Texas, I hope the media isn’t going to choose to focus on her wardrobe.” pic.twitter.com/Bp4Z8n455G

If you didn’t want anyone to focus on it … maybe you should have picked another jacket. I mean this isn’t rocket science. When your husband’s administration is accused of this kind of horrible, callous treatment, a jacket that states in bold lettering that you don’t care shouldn’t even be in your closet!

Oh, and to those wondering if this story is just a smokescreen to blacken Melania’s own good deed, lemme just say this: Melania is not an innocent in this. She co-signed Trump’s birther theories, she co-signed her husband’s comments about sexual assault, and she has reaped the benefits of her husband’s sexist and racist policies for years. Let’s stop treating her like a victim. She is a feckless woman who doesn’t want to speak up when she could. First Ladies of both parties have shown more gumption than any member of this White House family.

Stop turning Melania into something she’s not. She’s not a Handmaiden, she’s an Aunt.

As for this visit, Trump was guided around by the Upbring CEO, Dr. Kirk Senske, who told the First Lady: “We’re honored to show you our shelter. We treat them like our own children.” Well, if you parent like Mother Gothel I’m sure that holds.

“Trump asked several questions including how many times the children speak with their families. She was told twice a week, but the official noted that there is a process to verify that the persons they are communicating with are their families.”

The entire news cycle before this was announced wanted to make it clear that Mrs. Trump was acting upon on her own desires, not the will of the President. Which is fine, but getting a guided tour by a CEO is not exactly going to be an honest look, especially when she’s going in without reporters or any other third party to verify.

People keep holding out for one of the two main Trump proxy women, Melania and Ivanka, to be more than the black accessories they have been and that, quite frankly, has been proven to be too much. Ivanka does nothing with her official White House roles except deflect using her image as the “smart” and “beautiful” one, while Melania has coasted on being the “suffering wife” because her husband is a philanderer. If only people felt that bad for Hillary.

I have no doubt Melania Trump does have a beating heart and feels sympathy for these children, but that means nothing when she is complicit in supporting and uplifting the man who put these children in this situation to begin with. That jacket is just another reminder of who she really is and who she’s married to.