Melania's Statue Burned Down and I Really Don't Care, Do You | The Mary Sue

The wooden statue was located near her hometown of Sevnica, Slovenia. 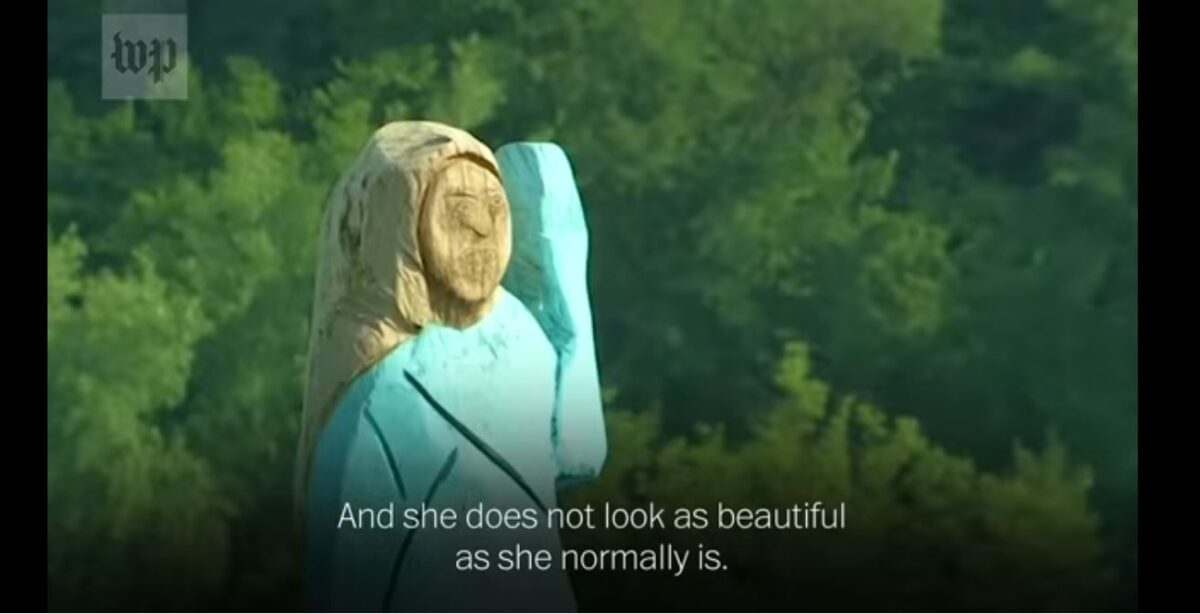 If you’re looking for apt metaphors for the Trumps, a wooden sculpture of First Lady Melania Trump has burned down. The statue, which is located close to her hometown of Sevnica, Slovenia, was torched on the 4th of July by vandals/heroes, nearly a year after it was installed. Brad Downey, a Berlin-based American artist, had commissioned the sculpture from local artist Ales Zupevc. Zupevc used a chainsaw to sculpt the less than flattering likeness from a living linden tree trunk.

Downey has since had the charred husk of the statue removed. “I want to know why they did it,” said Downey, who has filed a police report about the incident. Downey had hoped that the sculpture would foster conversation around immigration, given that Melania is an immigrant married to a virulently anti-immigration president. Downey has said that he would like to interview the vandals for his upcoming documentary.

So far no suspects are in custody. Whoever vandalized the statue is likely responding to the monument battle that is currently unfolding in America and across the world. In January, a 26-foot statue of Donald Trump was burned in Slovenia. Apparently the statue had a fist in the air and a mechanism that would open its mouth to reveal sharp teeth. Terrifying.

As Confederate statues are torn down by protesters and removed by local governments, Trump and his cronies have latched onto the issue, with Trump threatening to extend punishments for vandals. There are rumors that Trump wants to bring statues along on the campaign trail as props for his rambling speeches.

Of course, the torching of Melania’s statue was fodder for plenty of jokes on social media. And come on with that statue: even before it burned, it was next-level bonkers. Was it intentionally an eyesore? I don’t know readers, I did not go to art school.

And yet, I cannot stop staring at her wooden, haunted eyes, her slash of a grimace. Her hand held up, frozen in faux patriotism. Is this statue crying out for help to an unhearing Slovenian forest?

What is Wooden Melania thinking? And is it anything deeper and more complex than the slightly less wooden real Melania?

Burn it all down.

Brad Downey, the artist, had the life-sized blackened, disfigured sculpture removed as soon as police informed him of the incident. Well, it sounds like no damage occurred. pic.twitter.com/KsC2b65v46

A statue of Melania Trump, that previously stood near her hometown of Sevnica, Slovenia, was set on fire on July 4. The statue wasn’t destroyed, but was significantly charred before the artist took it down.

I DON’T REALLY CARE, DO U?pic.twitter.com/IDgndG7o31

I try very hard to be a kind and gentle human, but I can’t stop laughing at this Melania statue. Thanks, Slovenia. You did the right thing, pic.twitter.com/XULNir4vV1

That’s a shame because, from an artistic point of view, the crude, wooden statue perfectly captured Melania’s full range of emotions. https://t.co/1v1YJMweo6

The news story here is that a statue of Melania Trump in her home town has been burnt down. But… the statue. https://t.co/OLSffT8i1W pic.twitter.com/qVWMfwv9P3

🔶
A photo of a wooden sculpture resembling Trump on fire, in Moravce, Slovenia, Jan. 9, 2020. The wooden nearly 26 feet statue mocking US President Donald Trump was constructed last year, has been destroyed by fire in the homeland of his wife Melania Trump.
🔶 pic.twitter.com/ob1jAvQc82