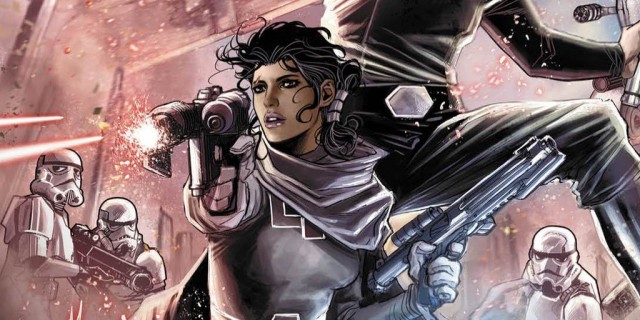 What happened in between Return of the Jedi and The Force Awakens? Shattered Empire, a Marvel comic series set in the Star Wars universe written by Greg Rucka and illustrated by Marco Checchetto, picks up right after Return of the Jedi left off. Its protagonist, a top-notch Rebel pilot named Shara Bey, helped secure victory at Endor and then went on to work with Princess Leia and Luke Skywalker on various secret missions.

We already knew a few of those details last year when the books got announced — but now that the books are actually out, we’ve learned that heroine Shara Bey is married to a fellow Rebel fighter named Kes Dameron, and the pair of them have a little boy named Poe at home. I guess young Poe ended up following in his mom’s footsteps later in life!

Although many of the familiar faces from the original Star Wars trilogy make appearances in Shattered Empire, Shara Bey is the hero around which this short four-book arc revolves. I call it “short,” because although every book is 21 pages and action-packed, it still feels like it goes by too fast! I left wanting to know way more about Shara and her family.

Although the story touches on how Shara and Kes would much rather be at home safe with their son instead of fighting a war, I didn’t get the impression that this was just another tale of a busy mother who can’t manage to “have it all.” Shara’s story is a little more complicated than that — it doesn’t seem like she’d be entirely opposed to Poe carrying on the torch as an adult, even if her career did keep her away from him in his youngest years. We do know from Greg Rucka’s Before the Awakening that toddler Poe must have looked to his mom for guidance on a path in life, since she used to take her boy out flying in her old Rebel Alliance A-wing. So it’s not like they didn’t get to spend any quality time together.

Have you all checked out Shattered Empire yet? What do you think about Poe’s family and back-story?