Medicine Ink Could Revolutionize the Way We Take Pills 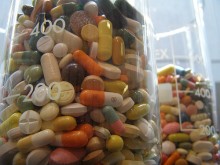 Why put medicine in the pills when you can print it on the pills?

A team of researchers led by Dr Nik Kapur, collaborating between University of Leeds, Durham University, and GlaxoSmithKline, has found a way to dissolve  some medicines down into a liquid, then transform that liquid into a printable ink. From here, the medicine could be printed onto the surface of a generic tablet.

While this may just seem like an unnecessary technological sophistication for a practice that works fine as it is, the new innovation could actually simplify medicine considerably and help cater prescriptions to the customer. Multiple medicines could be printed onto the same tablet, reducing the number of pills any one person may have to take. Also, without the need for preservatives, the pills could be drastically reduced in size.

From a manufacturing standpoint, this would also really increase efficiency. Instead of creating all these different tablets, there could just be one standard tablet onto which the medicinal ink could be printed on a prescription by prescription basis. This also allows for medicine to be allocated to each tablet in the exact dosage required for the individual. No more would the ill have to cut pills in half or worry about dosages themselves. And with the active ingredients on the outside of the pill, the medicines would take effect quicker than a traditional pill.

As great as it could be, the science is still very much in the early stages. Only half a percent of all medicines traditionally administered in tablet form have been successfully inked, and the medicine droplets are far larger than a traditional ink droplets, meaning it may require more medicine-ink than a tablet could support to reach the required dose. Obviously, the team would need to successfully shift more types of medicine and increase the concentration of medicine in their droplets before this really gets off the ground.

The researches hope that their new project will increase that half a percent up to a whopping 40 percent. This seems like an overly ambitious goal, but it’s such a new science that it’s impossible to know how realistic it really is.