Rose McGowan is a great and enthusiastic fighter for the feminist cause, no question. However, what is questionable is whether or not her punches are always aimed at the right targets. This weekend, in a fit of righteous fury, she tweeted something that she’s since taken back, but that allows us all to think about how women talk about the contributions of other women to the feminist fight.

In response to the news that many A-list actresses will be wearing black during this year’s awards season in solidarity with the #MeToo Movement, McGowan took to Twitter to express her displeasure at what she calls the “hypocrisy” of this protest coming from women like Meryl Streep, whom she named in the now-deleted tweet below:

For those who don’t know, Marchesa is the fashion line founded by Georgina Chapman, Harvey Weinstein’s soon-to-be-ex wife.

McGowan has since tweeted an apology of sorts. Not to Streep, exactly, but for bringing up Marchesa:

The Marchesa line was beneath me and I’m sorry for that. Seeing that picture of Alyssa Milano with GC has ignited something in me that I can’t quite articulate. There is no map for this road I’m on, I will fuck up. Peace be with you, go with Goddess.

I don’t quite understand the hostility toward Chapman. I feel nothing but sympathy and pity for the woman who married that horror-show. The cynical among you might say But she must have known what was going on, and she totally got money out of his abuse. You might be right, and there are likely things that McGowan knows about Chapman that I certainly don’t.

All I know is that, from the outside looking in, I see this woman who is married to a man she presumably had feelings for at some point who has now left her husband after finding out the extent of his horribleness (because it was certainly no secret that he angered easily and was a bully). She likely knew she was married to an asshole. However, how much she knew about what he did beyond that is up for debate.

I always wonder about what the women married to these abusive men might be going through themselves. For example, when writing my piece on T.J. Miller, particularly the part about the joint statement he issued with his wife, I had to wonder about what she might be going through with him. If his accuser’s account is true, that means that he is someone who is capable of abusing a partner.

I have no idea what is going on behind closed doors as far as they’re concerned, but it’s something to keep in mind when talking about the women involved with these men. She might be among the women who’ve suffered at this abuser’s hands. Likewise, Chapman. If Weinstein was capable of so much abuse to so many other women, it’s not outside the realm of possibility that Chapman has suffered behind closed doors, too.

Enter Meryl Streep, whose statement raises important questions about what we can/should expect from powerful women. Apparently, after McGowan’s tweet, Streep reached out to her through mutual friends, passing along her number in the hopes that McGowan would call and they could have a talk about it. McGowan never called. In fact, this was her response to Streep’s statement today:

It’s unclear as to whether the laughing emoji means that she’s accusing Streep of lying about trying to reach out to her, or that she’s laughing at the idea of calling Streep. Either way, it’s clear that she doesn’t particularly buy Streep’s statement. And what was Streep’s statement? Here’s a portion of it, courtesy of Pajiba:

I don’t know where Harvey lives, nor has he ever been to my home.

I have never in my life been invited to his hotel room.

I have been to his office once, for a meeting with Wes Craven for “Music of the Heart” in 1998.

HW distributed movies I made with other people.

HW was not a filmmaker; he was often a producer, primarily a marketer of films made by other people — some of them great, some not great. But not every actor, actress, and director who made films that HW distributed knew he abused women, or that he raped Rose in the 90s, other women before and others after, until they told us. We did not know that women’s silence was purchased by him and his enablers.

HW needed us not to know this, because our association with him bought him credibility, an ability to lure young, aspiring women into circumstances where they would be hurt.

He needed me much more than I needed him and he made sure I didn’t know. Apparently he hired ex Mossad operators to protect this information from becoming public. Rose and the scores of other victims of these powerful, moneyed, ruthless men face an adversary for whom Winning, at any and all costs, is the only acceptable outcome. That’s why a legal defense fund for victims is currently being assembled to which hundreds of good hearted people in our business will contribute, to bring down the bastards, and help victims fight this scourge within.”

Streep goes on to express solidarity with the victims of Weinstein, and any of these other powerful men who stand accused, and asserts that:

“I am truly sorry she sees me as an adversary, because we are both, together with all the women in our business, standing in defiance of the same implacable foe: a status quo that wants so badly to return to the bad old days, the old ways where women were used, abused and refused entry into the decision-making, top levels of the industry. That’s where the cover-ups convene. Those rooms must be disinfected, and integrated, before anything even begins to change.”

I’ve often gone back and forth, wrestling with the narrative that everyone knew. Because how could they? Predators are manipulators who excel at keeping friends and hiding their crimes. It makes sense that there would be “prestige women” that someone like Weinstein would keep around to give him “cred” with the younger actresses he hoped to attract. See? this move asserts. Meryl works with me. Important, respected (and respectable) women work with me. You have nothing to fear. It makes sense that, in order to keep someone like that around, he’d make extra-sure that she was kept unaware of what was going on, to maintain her trust and proximity. 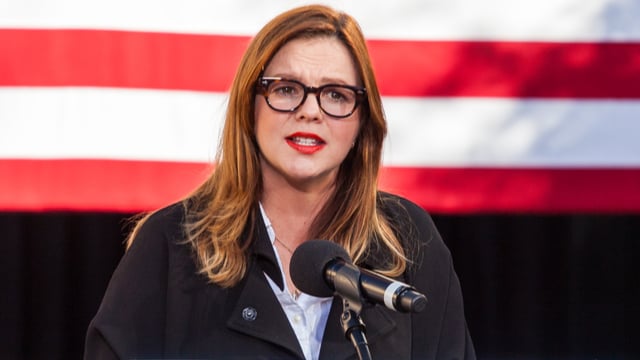 Enter Amber Tamblyn, friend of McGowan, and herself a vocal feminist force. According to The Hollywood Reporter, Tamblyn was publicly critical of McGowan’s approach with the deleted tweet, saying on Twitter:

“[Rose] is a friend and while I support her kind of movement, I do not support any woman (or man) shaming or taunting the movements of other women who are trying to create change. Telling us to all wear Marchesa? This is beneath you, Rose.

“Our movement is big. And a black dress is just the beginning of the darkness that will be drained from every industry across the country by the time we’re done. That’s a promise.”

While McGowan’s Charmed co-star Holly Marie Combs called out Tamblyn for doing “to @rosemcgowan what you claim you don’t support her doing to others,” calling for people not to dilute the common feminist message, Tamblyn asserted that, “Her statement was public and hurtful to some women so a public response was earned. I spoke to her at length today, she knows how I feel. I love Rose fiercely, that will never change. To be critical of an action is not to condemn the person behind it. There’s your common message.”

I think that Tamblyn hit the nail on the head when she said, “Our movement is big,” and decried the shaming or taunting of other women. I would say that this is one time when, as a feminist, I do feel comfortable being critical of another woman’s actions. Well this, and the fact that feminism requires that we listen to all women, including women of color and trans women. (Yes, these are all white, cis, straight women participating in this conversation about a movement started by a black woman 10 years ago, as people continue to erroneously credit McGowan for “starting” it.)

And we need all of it. At the same time.

I don’t always agree with McGowan’s methods or focus, but I respect the hell out of her, because she’s fighting in the way that makes sense to her. The only thing I would criticize are snipes against other women. Yes, there are women who looked the other way, who work with these men willingly, etc, etc. However, while I would always hope that women put the fight before their own well-being and survival, the fact is that it is about survival, and I understand how strong the self-preservation instinct is.

Women have been backed up against the wall for centuries. We shouldn’t punish each other for our varied responses to trauma, or the differences in our fighting styles. We’re not all the Molotov cocktail-throwing type. That doesn’t mean we’re not all fighting in one way or another.