How Did May Day Go From Fertility Festival to Protest? | The Mary Sue

How Did May Day Go From a Fertility Festival to a Day of Protest? 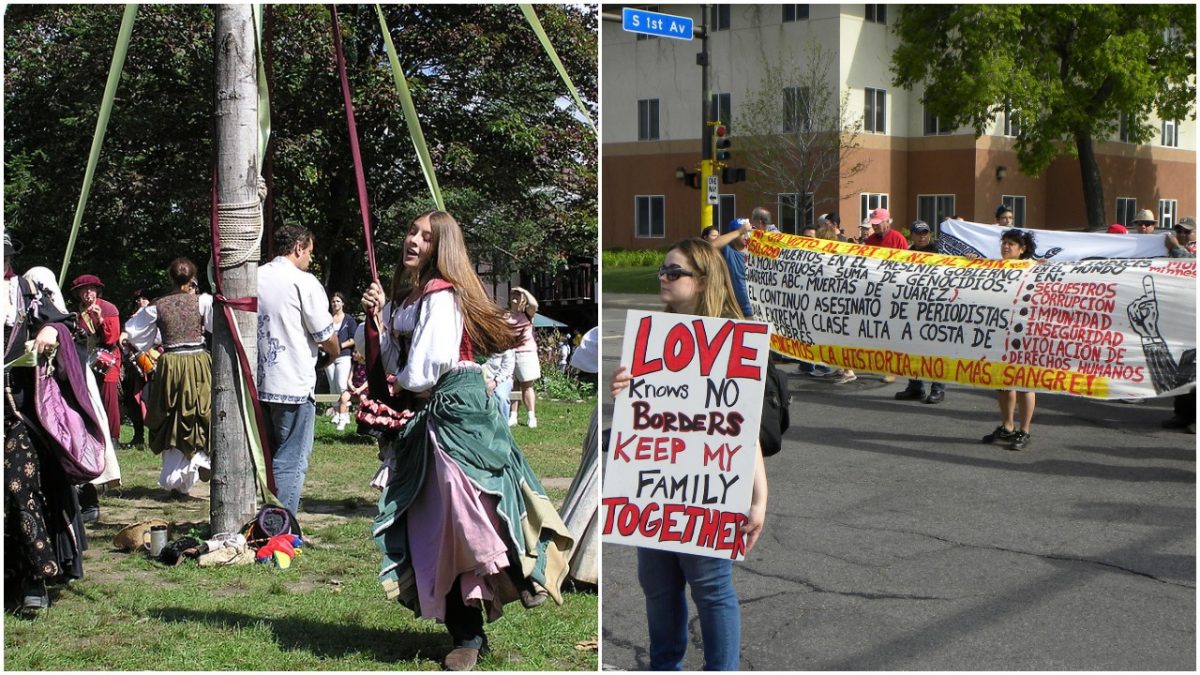 Today is the first day of May. For many people across many cultures, it’s a day of celebration. For the pagans, it’s Beltane, a version of the Gaelic festival of Bealtaine; for Germans and Catholics, last night was Walpurgisnacht; and for many others, it’s simply May Day. May Day is a time for fun, dancing, and celebration of the abundant life newly blooming in nature, but for many, May Day is also International Workers’ day, a day for protests, strikes, and bringing attention to important issues in the world, especially for workers and immigrants.

How did this happen? There’s not an easy-to-discern line between workers and what is basically a fertility festival. Well, history, as always, is complicated and surprising.

For many, like the Celts, May 1st was the start of summer. Beltane was one of four major Gaelic festivals that followed a pastoral, season cycle (Samhain, which became Halloween, is also one, and is in many ways the opposite of Beltane). At Beltane, fires were burned and people celebrated the movement of herds to summer fields. Livestock was driven between fires to bless them, and people lit their home fires from the sacred flames of Beltane.

May Day celebrations all over Europe have the same vibe as Floralia and Beltane. They’re about sex and blessing the crops and herds and assuring an abundant year. It’s about the fun and sexiness of the start of summer, with dances around phallic May Poles and the like. It’s a time of fun and abundance for people and farmers. The agricultural aspect might be the closest thing we have to a connection to workers.

In 1889, May 1 was designated as International Workers’ Day. The date was chosen to be close to the anniversary of the “Haymarket Affair“, which occurred on May 4, 1886 in Chicago. The “affair” began as a peaceful protest by workers asking for an eight-hour work day at Haymarket square in Chicago, but it turned into a bombing and riot where workers and police were killed.

May 1 was chosen as Workers’ Day by socialist groups, and since then, it has been associated with specifically socialist sentiments, which is one of the reasons Grover Cleveland set Labor Day in the U.S. in September five years later. It was a move to dissociate the American celebration of laborers from socialist associations.

But Workers’ Day grew in influence and popularity in the twentieth century, with the date being adopted by socialist counties and governments, like the USSR. Despite the fall of those regimes, May Day has remained a day of protest and gatherings to call attention to worker’s rights, as well as immigrant rights. May Day has also become a rallying day for anarchists.

May Day protests still happen in the U.S. In Seattle in particular, May Day has become an annual event that has meant large-scale protests, though this year, things will be much quieter (or at least that’s what people are hoping). This year, May Day and International Workers day will be the date of massive strikes and protests against mega-corporations like Amazon, calling for better conditions for workers.

May Day is a date with many meanings, but the great thing is that you don’t have to pick one way to celebrate. You can dance around a bonfire tonight and not but anything from Amazon or Walmart today in support of workers. Parties and protests don’t need to be separate, and you May do whatever works.