Rep. Matt Gaetz Is Under Investigation for Possible Sex Trafficking & He Should Really Stop Trying To Defend Himself

It's not going the way he thinks it's going. 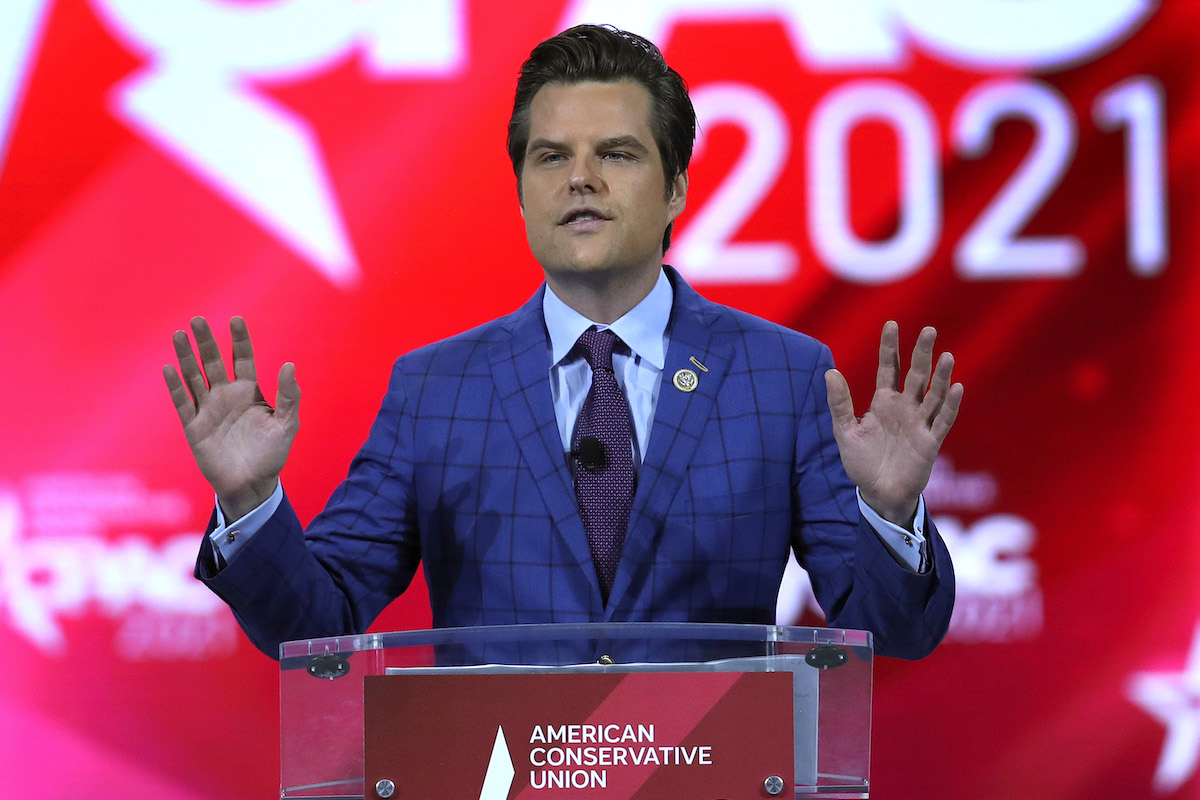 Matt Gaetz, the emphatically pro-Trump, anti-human decency congressman from Florida, is reportedly under investigation for possible sexual relations with an underage girl and trafficking charges.

According to the New York Times, the Department of Justice began investigating Gaetz in the last months of Donald Trump’s presidency. Investigators are reportedly looking into whether Gaetz had a sexual relationship two years ago with a then-17-year-old girl, and whether Gaetz may have paid for her to travel across state lines with her. In Florida, the legal age of consent is 18 and travelling with a minor “to engage in sex in exchange for money or something of value” is a violation of federal sex trafficking laws.

According to both the Times’ report and Gaetz’s own statements, it is believed that he is “the subject, not the target” of this investigation. Meaning, the DOJ is looking into these allegations but the bigger target is one of Gaetz’s political allies, a former tax collector named Joel Greenberg.

Greenberg is currently on trial for a number of charges, including trafficking a girl between the ages of 14 and 17, cultivating “sugar daddy” relationships with other underage girls, and using his access to a government database to look up information on the girls and to make fake IDs “to facilitate his efforts to engage in commercial sex acts,” according to court documents obtained by the Orlando Sentinel.

None of this is good but Gaetz is managing to make things look even worse for himself. News of the DOJ’s probe broke less than a day ago and Gaetz has been out and about doing as many interviews as possible to defend himself, yet everything he says just adds new layers of WTF to this whole situation.

According to Gaetz, the investigation, or maybe just the leaked news of the investigation, is part of an extortion plot. He says that a former DOJ official, later named to Fox News as David McGee, is “seeking $25 million while threatening to smear my name.”

In a series of tweets, Gaetz said that his father has been wearing a wire as instructed by the FBI to help catch his blackmailers and that the people “pushing” the allegations against him “are targets of the ongoing extortion investigation.”

If my dad were wearing a wire I would simply not tweet about it https://t.co/8YSfO218Dd

anyway, if there’s one thing i’ve learned from movies, it’s that the guys who end up getting wired by the fbi are definitely always the innocent ones

Gaetz denied that the allegations against him were true but also, in an interview with Axios, he said he believed “that there are people at the Department of Justice who are trying to criminalize my sexual conduct, you know when I was a single guy.”

I don’t know how you can criminalize someone’s sexual misconduct unless that conduct is, you know, criminal, but okay!

He also told the New York Times that he doesn’t know much about the DOJ’s investigation (despite claiming to know that it is part of a larger extortion conspiracy???) but says, “I only know that it has to do with women.”

He added, “I have a suspicion that someone is trying to recategorize my generosity to ex-girlfriends as something more untoward.”

His generosity. To ex-girlfriends.

Last year, Gaetz revealed that he had unofficially adopted a teenage Cuban boy named Nestor, who is the brother of Gaetz’s ex-girlfriend. Is he implying that he did something else for a different ex-girlfriend that could somehow be construed as trafficking a minor? What does that statement mean??

Gaetz told Axios, “I have definitely, in my single days, provided for women I’ve dated. You know, I’ve paid for flights, for hotel rooms. I’ve been, you know, generous as a partner. I think someone is trying to make that look criminal when it is not.” He said none of the women he’s dated were underage, so I still don’t understand what he’s saying here.

For some reason, QAnon people are refusing to take their dream scenario coming true — a sitting congressman being investigated for child trafficking — at face value. They love Gaetz’s inscrutable double agent story because it sounds like 5D chess.

But without a doubt, the weirdest interview Gaetz has given was to Fox News’ Tucker Carlson.

Gaetz expounded on the claim that he was being extorted, telling Carlson that someone (David McGee) contacted him two weeks ago and was seeking $25 million to make the DOJ investigation “go away.”

McGee, by the way, who no longer works at the DOJ, denied all of this, telling the Washington Post, “It is completely false. It’s a blatant attempt to distract from the fact that he’s under investigation for sex trafficking of minors,” adding, “I have no connection with that case at all, other than, one of a thousand people who have heard the rumors.”

Yikes. But back to Tucker.

After defending himself, Gaetz said to Carlson, “I’m not the only person on screen right now who’s been falsely accused of a terrible sex act. You were accused of something you did not do so you know what this feels like.”

“I’m not the only person on screen right now who has been falsely accused of a terrible sex act. You were accused of something you did not do” — Matt Gaetz to Tucker Carlson pic.twitter.com/OmPXtAyHyb

Carlson said that Gaetz was referring to an incident that happened 20 years ago. And again, the investigation into Gaetz’s alleged behavior started during the Trump administration. Nonetheless, Gaetz says both of these are proof that “we are in an era of our politics, where people are smeared to try to take them out of the conversation.”

Ah yes, the old, “cancel culture coming for a generous ex-boyfriend whose dad is wearing a wire for the FBI” argument. Classic.

Gaetz then went on to seemingly implicate Carlson in the allegations against him, again saying he didn’t know anything about the investigation beyond what he’s read in the New York Times, but then going on to voluntarily offer up some pretty weird anecdotes.

“I can say that actually you and I went to dinner about two years ago, your wife was there, and I brought a friend of mine—you’ll remember her,” Gaetz said. “And she was actually threatened by the FBI, told that if she wouldn’t cop to the fact that somehow I was involved in some pay-for-play scheme, that she could face trouble.”

“You and I went to dinner… I brought a friend of mine. You’ll remember her.” pic.twitter.com/eyV0o61vFZ

Gaetz continued: “So I do believe there are people at the Department of Justice who are trying to smear me. You know, providing for flights and hotel rooms for people that you’re dating who are of legal age is not a crime. And I’m just troubled that the lack of any sort of legitimate investigation into me would then permute, would then convert into this extortion attempt.”

I don’t know, the investigation into him is seeming more “legitimate” every time he opens his mouth.

As for Tucker Carlson, who I can imagine could expect a call from the FBI pretty soon, his permanent expression of utter bewilderment seemed to actually be genuine confusion for once.

When he came back from his commercial break, Carlson said that his interview with Gaetz was “one of the weirdest interviews I’ve ever conducted.”

Wow. Back from commercial, Tucker Carlson proclaims that the interview he just conducted with Gaetz was “one of the weirdest interviews I’ve ever conducted.” pic.twitter.com/85Fnyv4Km9

“On the certainty that there’s always more than you read in the newspaper, we immediately called Matt Gaetz [after the story broke] and asked him to come on and tell us more. Which as you saw, he did,” Carlson said with a smirk, adding that he didn’t think Gaetz’s appearance “clarified much” but that the still-unfolding story is “deeply interesting.”