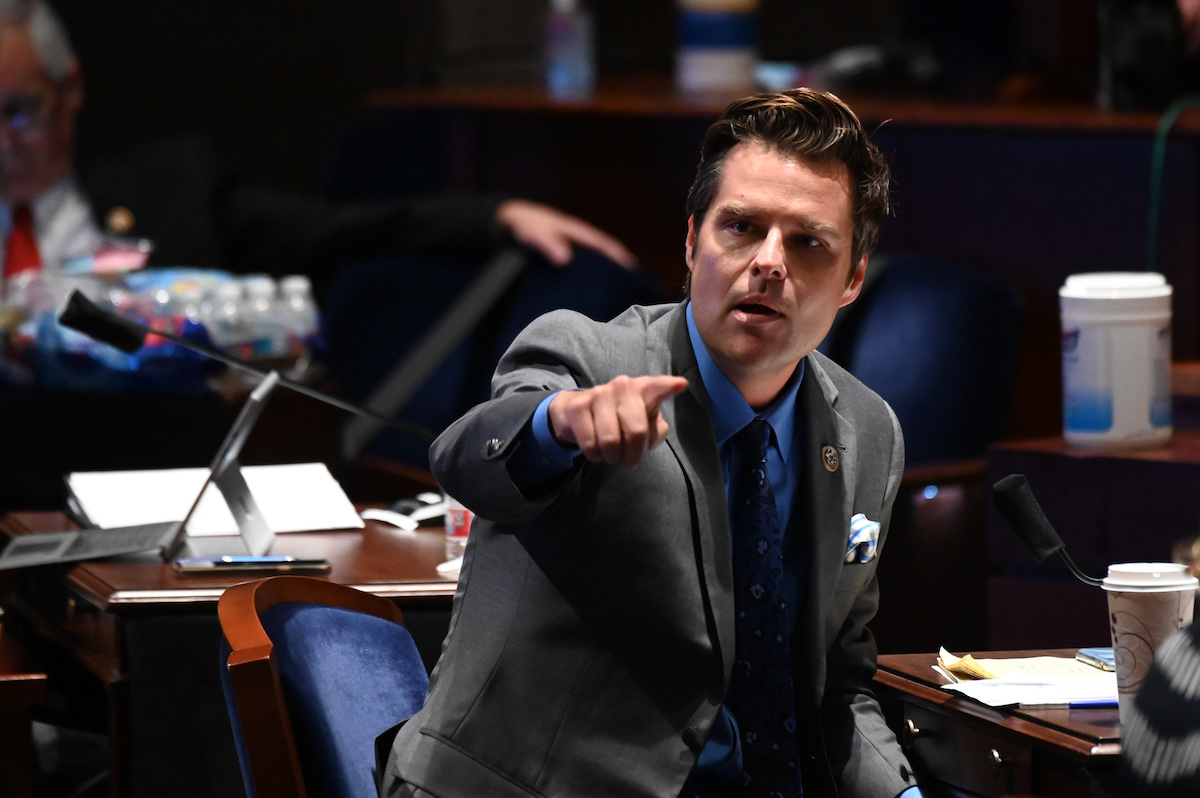 The House Judiciary Committee met Wednesday to discuss the Democrats’ Justice in Policing bill. The committee’s Republican contingent, however, chose to try to hijack the hearing by talking about James Comey, Michael Flynn, and their secret adult sons. It was a weird day.

The Justice in Policing Act proposes a number of actionable reforms like banning things that should never have been legal in the first place (choke-holds, no-knock warrants, etc), as well as bigger picture ideas like reinvesting in community-based policing programs and “[changing] the culture of law enforcement.” But the Republicans present repeatedly tried to steer the conversation toward unrelated subjects, from antifa to abortion to impeachment.

Eventually, Rep. Cedric Richmond of Louisiana, who is Black, made it clear he’d had enough.

“I am absolutely sitting here offended and angry as hell,” Richmond said. “And I want to explain, what we always say is how we refer to each other, my good friends on the other side. By the time I’m finished, you will be clear that we are not good friends.”

“As a Black male who went to the fifth-best public high school in the country, who was a victim of excessive force, who has a Black son, who has worries that you all don’t,” he continued. “To my colleagues, especially the ones that keep introducing amendments that are a tangent and a distraction from what we’re talking about, you all are white males, you never lived in my shoes, and you do not know what it’s like to be an African-American male. And all I’m saying is, if you are opposed to this legislation, let’s just have the vote. But please do not come in this committee room and make a mockery of the pain that exists in my community.”

Richmond condemned the Republicans in the room for their digressions, comparing their behavior to similar tactics used in the 1960s when debating Civil Rights legislation. “Either man up and say you don’t believe in it or let’s talk about the real issue,” he said.

Instead, Matt Gaetz interrupted Richmond to talk about his own real issue, and that was the reverse racism (not a thing) he appears to have perceived in Richmond’s true statement that he, along with the other Republicans on the committee, are white, and the presumption then that none of them have non-white children (even though Richmond was specifically talking about Black men and boys).

The exchange is truly bizarre. Gaetz has a full meltdown on the floor of Congress at the implication that he doesn’t have a Black child, which he doesn’t.

What on earth made Matt Gaetz think he could take on The Gentleman From Louisiana lmao?!🔥 pic.twitter.com/cOe3ci1nSI

Here’s the exchange between the two:

GAETZ: I appreciate your passion. Are you suggesting that you’re certain that none of us have nonwhite children? Because you reflected on your Black son, and you said none of us could understand—

RICHMOND: Matt. Matt. Stop. I’m not about to get sidetracked about the color of our children. We’re talking about Black kids —

RICHMOND: I reclaim my time. I reclaimed my time. I already know that there are people on the other side that have Black grandchildren. It is not about the color of your kids. It is about Black males, Black people in the streets that are getting killed. And if one of them happens to be your kid, I’m concerned about him too. And clearly I’m more concerned about him than you are. So let’s be clear about that.

GAETZ: You’re claiming you have more concern for my family than I do? Who in the HELL do you think you are?

RICHMOND: If the shoe fits.

GAETZ: You don’t know how much we care about our families. It is outrageous. You should take those words down. I know you care about your family and love your family. So do we, damnit!

RICHMOND: Was that a nerve?

GAETZ: Yeah! You’re damn right it was a nerve.

i beg you to watch this vid of matt gaetz losing it https://t.co/15uHBhmJyv

As it turns out, Matt Gaetz does have a nonwhite son. Sort of. On Thursday, he posted a picture of himself and a teenage boy on Twitter, writing, “For all those wondering, this is my son Nestor. We share no blood but he is my life. He came from Cuba (legally, of course) six years ago and lives with me in Florida. I am so proud of him and raising him has been the best, most rewarding thing I’ve done in my life.”

For all those wondering, this is my son Nestor. We share no blood but he is my life. He came from Cuba (legally, of course) six years ago and lives with me in Florida.

I am so proud of him and raising him has been the best, most rewarding thing I’ve done in my life. pic.twitter.com/JB96wzOzYU

This was surprising to most people because until today, no one outside of Gaetz’s immediate circles seems to have heard of Nestor. A Google search of their names brings up exactly zero results before Wednesday. Some internet sleuths found a few appearances of Nestor on Gaetz’s social media, where the congressman referred to him as his “helper” and “local student.”

I love when my Dad calls me “Local student” too. You seem close. pic.twitter.com/O09vXQ0lOg

There were a lot of jokes (and speculation) on Twitter after Gaetz’s revelation as well as some of his colleagues coming out to defend him. Obviously, we don’t know what the deal is Nestor and why Gaetz had never mentioned him publicly until today and it really doesn’t matter. What does matter is that Gaetz—who pointedly refused to answer a direct question of whether he thinks Black lives matter during Wednesday’s hearing—chose to use his son as a deflection against Rep. Richmond’s very valid criticisms and a way to shut down discussions of police violence.

.@RepSwalwell: “Can anyone on the Republican side say unequivocally black lives matter?”

Richmond was trying to explain to a room full of white men how they can never understand his experience as a Black man and Gaetz’s reaction to fly into a rage because he raised a Latino teenager and Richmond didn’t explicitly acknowledge that in his remarks.

Just so I’m clear: Matt Gaetz is claiming he has an adopted son he’s been keeping a secret for 7 years but trotted out to score points against Democrats who have the audacity to be concerned about police violence against black men?

Did I get that right?

Matt Gaetz has decided to bring out Nestor – and make him part of the news coverage – as proof that he isn’t racist and cares about people of color. Yes he can love him and take care of him, but he is also using him as a convenient political prop. It’s all gross.

I honestly can’t tell if Nestor is a “helper,” a “staffer” a “son” or something else.

I can tell that Matt is engaging in political performance art. To what end, I cannot say.

It genuinely doesn’t matter if he loves Nestor and talks about him all the time if he’s still building a career on championing policies that could actively harm his son. It’s bad fucking parenting. https://t.co/FQv65Z6dDt

The more I hear and think about Matt Gaetz’s self-serving outing of his alleged son today, the more it goes from weird to a vulgar opposite of what a loving parent or guardian would do.