You Can’t Be a Pathfinder Without Shooting Things, I Guess: Mass Effect: Andromeda Combat Detailed in New Video 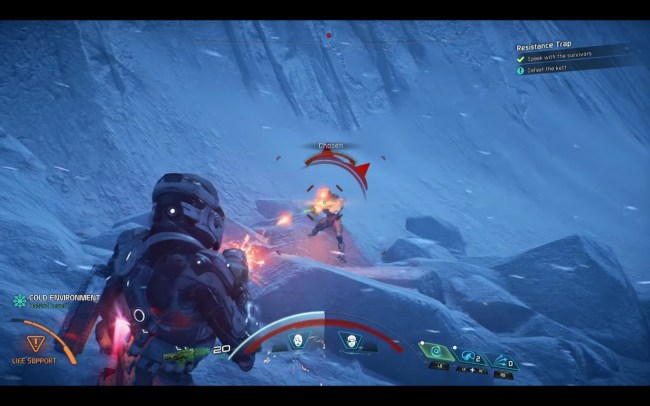 Next month brings with it the release of Mass Effect: Andromeda, and in keeping with the hype spacetrain, the fine folks over at BioWare have been slowly releasing a trickle of videos, each one made to peel back the curtain on a new aspect of the game. The latest video shows us what we can expect from Andromeda‘s combat, which, right up front, looks on the surface to be a welcoming familiar sight as compared to the old games.

The game is still a third-person shooter, as earlier videos have shown. As such, the combat seems similar (at least visually) to the combat of the original Mass Effect trilogy. But one major difference is that the class system is completely gone, exchanged for an interesting free-form character sheet where you can pick and choose from three different types of skill trees: combat, tech, and biotics. It looks like you can pull in three skills in any combination into your Skill Loadout, which (as they explain in the latter part of the video) can be changed on-the-fly.

There are also three types of weapons: physical projectile-based, energy-based, and plasma-based. While there are other plasma weapons in the original trilogy, the classification here works a little differently as the plasma ammunition is said to be slow moving and heat-seeking. There are also no class restrictions (because there are no classes), so you’re totally free to change your weapon if you wanted to try something new.

What’s clear with this new combat system is that customization and freedom take the fore. While some folks might be sad to see the class specializations go, I think the potential for a myriad of combinations is enticing in and of itself. It’ll be super intriguing to see what ends up being a more popular spec and what folks might do to mix up the challenge on subsequent replays (because you are going to play this more than once, let’s be honest with ourselves).

What do you think of the combat system? And did you already take March 21st off?