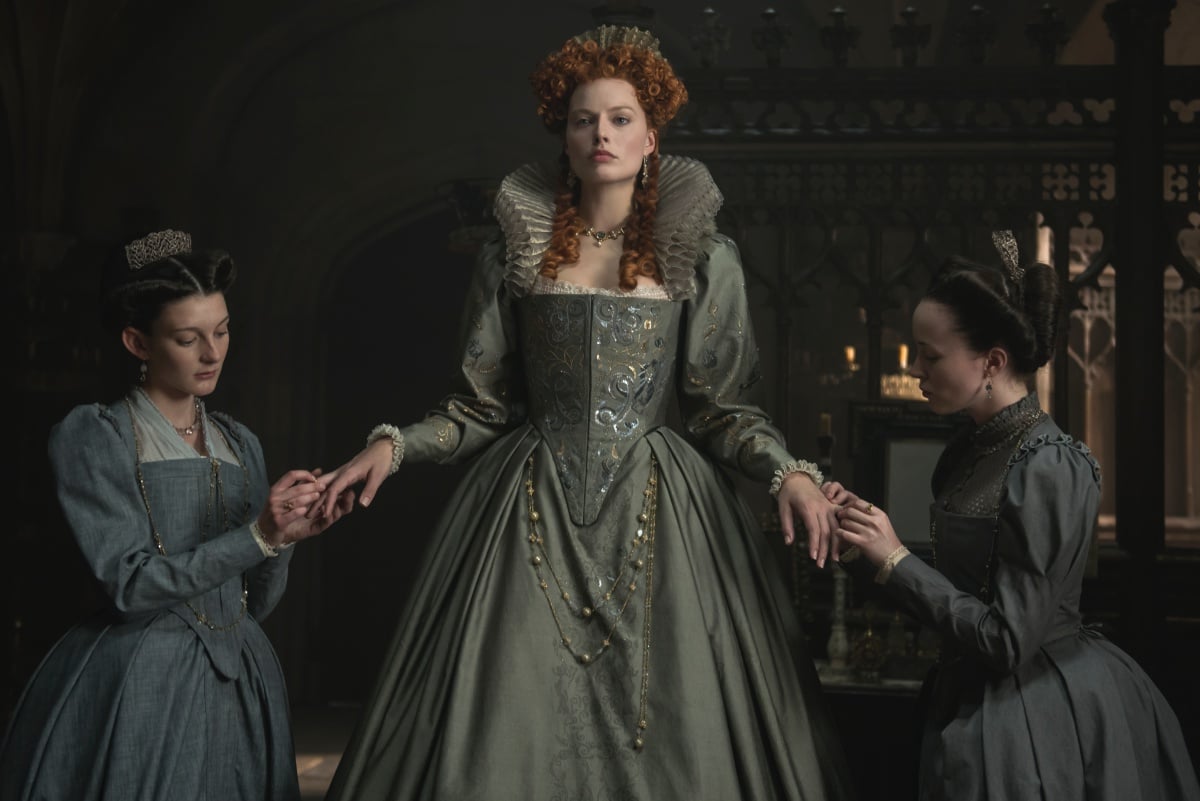 A trailer for the upcoming Mary, Queen of Scots movie from Focus Features has just been released and for me the excitement level is as if we got a trailer for a Marvel movie.

The trailer hints that this movie will start with Mary returning from France after the death of her husband Frances, King of France, and re-claiming her sovereignty as Queen of Scotland, a title she’s held since the death of her father at six-days-old.

For those who do not know, Mary and Elizabeth were cousins. Mary was the granddaughter of Margaret Tudor, who was sister to Henry VIII of England. Margaret married James IV of Scotland and gave birth to James V, Mary’s father.

In Henry VIII’s Act of Succession, he listed his heirs as: his son with Jane Seymour, Edward VI, his first daughter, Mary I, followed by his second daughter, Elizabeth II. If they had no heirs, the crown would go to his sister’s descendants. Which left Mary, Queen of Scots as Elizabeth I’s heir if she died without having a child.

Additionally, because Elizabeth was an Anglican and Mary was a Catholic, Mary had the backing of the Church and was viewed by the Catholic half of the country to be the true queen. Hence why the two rulers were always going to have problems, regardless of their own intentions.

Much like the ’71 Mary film starring Vanessa Redgrave as Queen Mary and Glenda Jackson as Elizabeth I, this film will focus on the rivalry between the two queens and how their relationship went from friendly-ish to ending in Elizabeth basically manipulating Mary into her own downfall. Also, like the ’71 film, it shows a scene where Mary and Elizabeth meet, something that did not happen in real life.

While I absolutely enjoyed The CW’s Reign for what it was, this looks to be a much more high budget, and a smidgen more historically accurate than its small screen predecessor. While I had my doubts about why they cast someone so young for the role of Elizabeth, we must never forget that Margot Robbie is a force to be reckoned with as an actress, and can completely embody the cool confidence of Elizabeth, as well as the vulnerability.

I especially love that the movie will be highlighting all the salty awful men who were trying to control both of these queens because god forbid a temperamental woman sits on the throne and not a man who married six different women (and killed several of them) to get one sickly son. We get a quick shot of the 10th Doctor himself, David Tennant, as John Knox, a zealot Protestant cleric who hates Catholics almost as much as he hates women.

I’m not sure why they felt the need to give Mary a Scottish accent when she grew up in France for most of her life, but I suspect it was an “on brand” choice. I do love that they gave Mary red hair and hopefully, we get the dramatic red dress execution scene we deserve.

One thing I’m happy about is that there will be some diversity in this film: Humans‘ Gemma Chan will be playing Bess of Hardwick, who was a close friend of Elizabeth I and kept Mary imprisoned for later years of her life. We see a black male member of Elizabeth’s privy council and among Mary’s ladies-in-waiting, so I’m happy that we are getting casting directors that don’t think period pieces need to be totally without diversity (also there were black people in these places at this time in history because of the Moors so *fart noise*).

This movie will be based on John Guy’s biography of Mary, Queen of Scots, which is one of the most recent biographies, which was lauded as framing Mary as not just a “romantic” queen, but one with the political and diplomatic will to go tete-a-tete with Good Queen Bess. It was an interesting read and probably one of the more empathetic towards Mary I’d ever seen, and if that is going to be the historical basis of the movie, I’m excited about that alone. Plus it’s being directed by Josie Rourke, a British theatre and film director.

So I’m going to be re-reading this biography for this film’s December release and let you know if it does justice to it’s leading ladies. Until then god save the queen! Well until 1587.