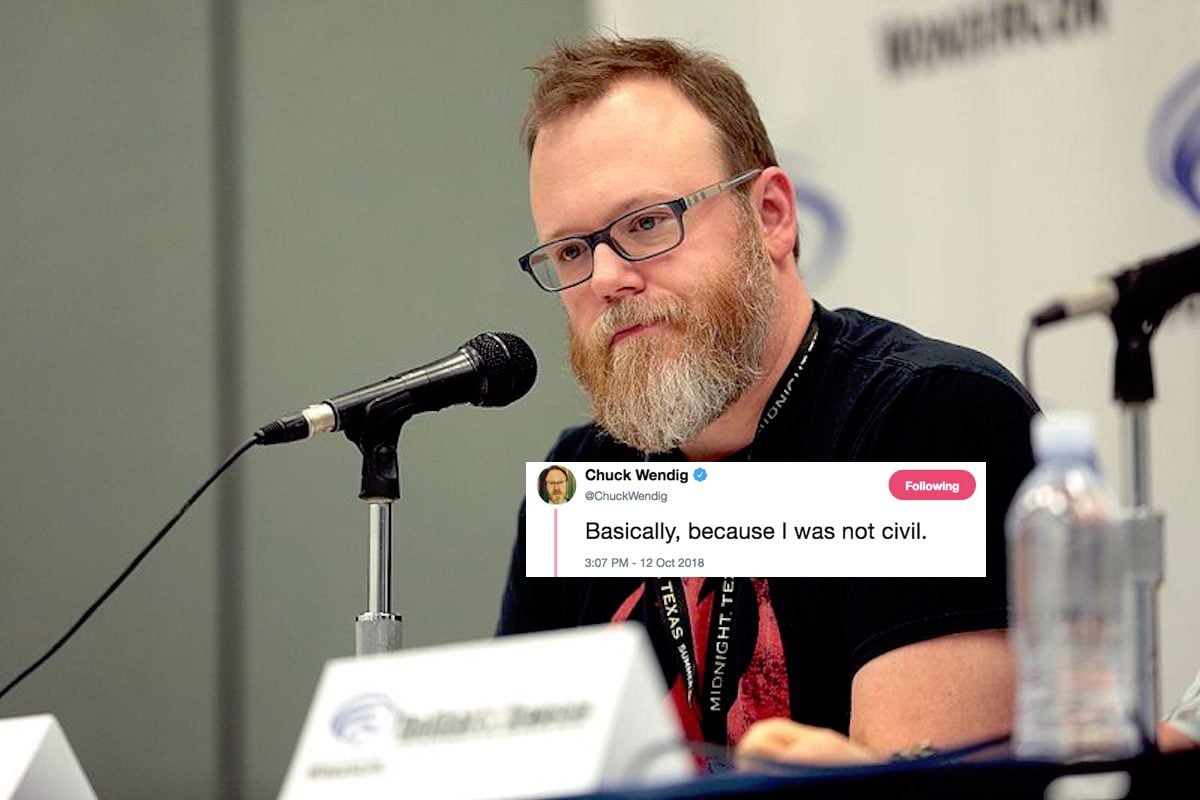 Let me preface this piece by saying that I am not an unbiased source when it comes to my feelings on Chuck Wendig and his politics. With his Aftermath series, and with the character of Sinjir, I felt seen for the first time by a franchise that categorically denied my existence as a queer person.

Wendig’s books are fantastic. His presence on Twitter is charming, and I’ll never look at heirloom apples without laughing. Furthermore, I view him as an ally in the ongoing fight not only for representation in media but in terms of actual, real-life politics.

So imagine my shock and horror when I refreshed Twitter today to see him announce that he had been fired by Marvel off of their Star Wars titles. Because of him being vocal and political on Twitter.

In a lengthy and informative Twitter thread, Wendig detailed his ongoing relationship with Lucasfilm and Marvel, starting with the Aftermath trilogy.

It’s worth noting that he has been receiving serious and targeted harassment since 2015 and the big reveal that the book contained three queer characters. It has only been worse since then—as a fan, I’ve watched as he’s dealt with trolls who resented a nonbinary character in Life Debt and Empire’s End, who resented that he liked The Last Jedi, who got angry when he spoke about his politics. And now, a week after he was announced as the writer for the Shadow of Vader miniseries, he has been fired.

Basically, because I was not civil.

Worse is that, while he says he does not know if Lucasfilm had a hand in the decision, he also tweeted that he had previously had support from Lucasfilm with regards to his social media presence and the way he dealt with harassment.

And privately, I was told by folks inside LFL that there was no worry here, that they valued that I spoke out both speaking up for myself and for STAR WARS, which has always honestly been a progressive brand and company.

This is complete and utter bullshit.

This is not a situation like James Gunn, or someone who gets pulled off a project because they spew bigotry and hate. This is a man being fired for not taking bullshit from a horde of trolls who have been harassing him for years for political views that helped shoot his books to the top of the best-seller list. He is literally being shut down for the fact that he expressed his politics and people got mad at him for doing so.

I know it hands Comicsgate a big win. It will embolden them. But they won — I’m out of Marvel and, I guess for now, at least, out of any kind of Star Wars. Do your victory lap, I guess. (Just please leave me out of it.)

It does hand Comicsgate a big win. It hands people who want to see their media homogenized and reduced down to the same white cishet male stories a massive win. Worse, it sends a message that if you want to work for a big title, keep your mouth shut and don’t talk about politics, even though at this point in the game silence is nearly complicity.

All art is political, and apparently people being angry that politics in certain works are progressive matters more than artists actually standing up for what’s right.

This is frightening. I won’t call it censorship, but it’s pretty close. It’s a big message saying keep your mouth shut and take the abuse, because apparently defending yourself (and others around you) is as bad as being a troll. It’s “vulgar.” It’s not “civil.” Marvel has known about Wendig’s politics since 2015 at the very earliest, but suddenly there’s a problem with him being his usual self and using his platform for good? There’s a whole stunning host of implications there.

Wendig encourages us to support the stories coming out of Marvel and Star Wars despite all this, with more grace than I believe they currently deserve because of these chilling implications. Thankfully, most of the reactions I’ve seen in reaction to this have been equally as furious.

Marvel’s fine with safe-guarding an EIC who posed as a Japanese man, but abandons a creator who’s been bombarded with harassment because he cares about equality?
Stop f*cking up, @Marvel. https://t.co/Z9rSJNXsM9

Marvel, this isn’t a good look. This is bullshit. Complete and utter bullshit. So maybe step back and reconsider this, because you’re sending a massively dangerous message not only to creators but to the trolls who haunt them.

You are demanding silence and civility in the place of people expressing political views that piss off the trolls and incels. And for the record, if this happened to a white male author, imagine what it must be like for creatives who don’t have the same privileges, who deal with even worse harassment?

What a mess of a world we live in.