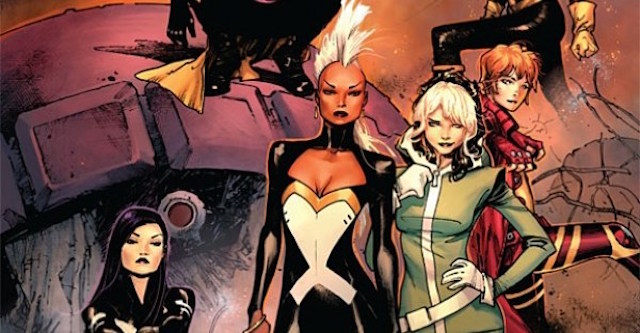 At a retailers’ breakfast happening adjacent to NYCC, comic retailers had a panel of Marvel editors, writers, and staff on hand to answer their questions. But a normally tame event erupted into bickering and boos, because our never-ending culture wars always seem to find a fresh battlefield.

As reported by Bleeding Cool, the retailers’ Q&A was mild enough for a while, with back-and-forths about reasonable issues like whether a series would be delivered on time and numbering patterns for a Hulk comic (you can read about the general news that emerged from the breakfast here). But then the mood took a turn:

So far, so good. Questions asked, answers given, everyone mostly okay,

Then one retailer got lots of applause for objecting to the ordering process for the Marvel Lenticular covers, […] Bleeding Cool has covered repeatedly objections to the way Marvel Comics have handled this.

But he kept going with his objections and soon he was bringing up the fact that Marvel now had female versions of characters instead of the males, with echoing shouts from the crowd of retailers about not changing all the characters all at once – which is something I have also hear Marvel executives echo. But things were getting tense.

Just reading to this part of the article made me close my eyes, take a deep breath and prepare for what was coming after, because you know it’s about to get worse here and not any better.

Two older retailers started raising their voices arguing about diversity and how it does not work. The words “black”, “homo” and “freaking females” were used multiple times, at which point other retailers started to boo those retailers and the room started to turn on itself. Marvel editor Nick Lowe tried to get calm by saying that Marvel try and they tell stories for everyone, that the old heroes are not going anywhere, neither are the new ones, there is room for them both.

The panel ended sharply, with Marvel‘s Senior Vice President of Sales David Gabriel saying that he would give out his e-mail address to any retailer who still had concerns. And with that everyone got kicked out of the area.

Why am I not shocked that it was “two older retailers” and “echoing shouts” that took up pitchforks about these comics crimes of diversity, complete with invoking racist, sexist, and anti-LGBTQIA language? It’s as though all of America’s current narrative of left-behind white men terrified of being replaced and terrified to see the world move on without them was boiled down into one room in Manhattan. I’m surprised no one was wearing a “Make Marvel Great Again” hat.

I guess it’s somewhat reassuring here that the gross behavior evidenced by a few members of the crowd was pushed back by boos and arguments from others present. And it sounds like Nick Lowe tried to make everyone settle down by saying there was room for everybody, which is better than Marvel execs blaming diversity for poor sales. I doubt there was a graceful way to calm this situation and turn the Q&A back to lighter topics after the mood became so heated, though ending it so abruptly isn’t helpful either.

I’m curious what the rest of the Marvel folks up there—a group that included Tom Brevoort, Christina Hanigan, and Charles Soule—thought about what went down and what, if anything, they would have said to the crowd on these topics if it hadn’t been hastily shut down. It must’ve been lovely for the one woman on the panel to there while retailers derided the rise of female incarnations of heroes and “freaking females” in general. And what about diverse retailers in the audience? What must it have been like to sit there?

(Check out the Bleeding Cool article linked below for images of irate white men arguing with Marvel execs after the panel while female NYCC staffers are within hearing range. That must’ve felt awesome to be a part of.)

I’d hoped NYCC might be a nice break from our news cycle of unremitting awfulness, but this was Day One (breakfast!) and already we’ve got this. Is there any space, anywhere, that doesn’t turn into a vicious and divisive us-vs.-them fight these days?