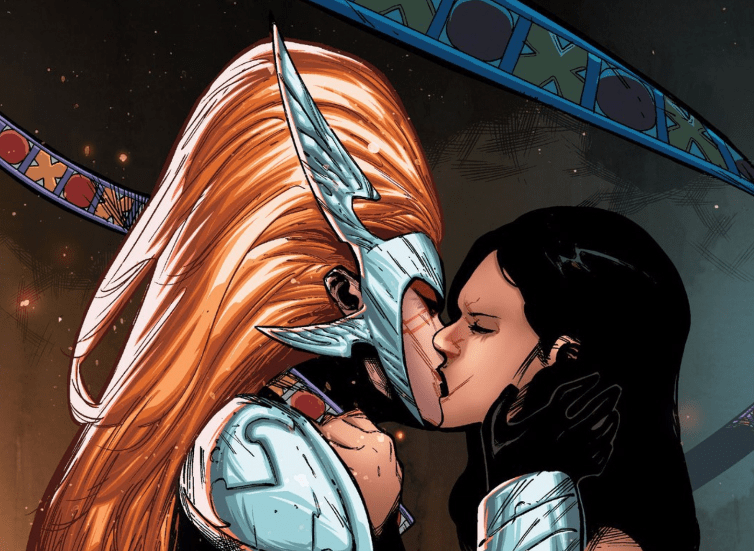 The issue seemed like a landmark moment of representation for many readers. Bennett’s Angela: Asgard’s Assassin brought us Sera as one of Marvel’s first-ever trans characters, and now Angela: Queen of Hel seemed to confirm Angela herself as a new LGBTQ+ character in Marvel’s overwhelmingly hetero universe.

But in an interview with Comic Book Resources, Marvel Editor-In-Chief Axel Alonso seemed reluctant to confirm Angela as a LGBTQ+ character despite the aforementioned awesome smooching:

CBR: The issue also confirmed the romantic relationship between Angela and Sera, something that had been speculated about by fans. So is it accurate to say that Angela is the first gay or bisexual lead character in the All-New, All-Different Marvel era?

Alonso: That’s a question for readers to ponder and answer for themselves. We’re not looking to put labels on the character or the series. We’d prefer that the story Marguerite, Kim and Stephanie are telling — all aspects of it — speak for itself.

As many readers were quick to point out, it’s ironic that Alsono claimed he isn’t “looking to put labels” on characters considering how quick he was over the summer to shut down hopes that Hercules’ alt-universe bisexuality would be honored in the Hercules solo series.

“We don’t want to put labels” but Hercules is definetely “straight” right? @axelalonsomarv .. that’s it im out https://t.co/hW8TSlmd9A

Despite their recent increased push for diversity, Marvel still seems nervous about confirming the identity of obviously LGBTQ+ characters, and it’s infuriating to see Alonso cloaking that cowardice with a claim to not be ‘interested in labels.’

Queer readers see what you’re doing, Marvel. Allowing the story to ‘speak for itself’ isn’t some form of advanced representation, it’s erasure–and it doesn’t do Angela: Queen of Hel justice.

It’s disingenuous to try and appease queer readers by touting Marvel’s preexisting LGBTQ+ characters, while at the same time seeming uninterested in truly celebrating awesome representation in a new book. Marvel’s continued attempts to distance itself from queer characters while still earning ‘points for diversity’ says a lot about how they view the LGBTQ+ community, and about where queer readers might want to start directing their money.

You can’t disrespect queer people as a publishing policy, closet LGBT representation by reducing it to an interpretation, & get my $ @Marvel