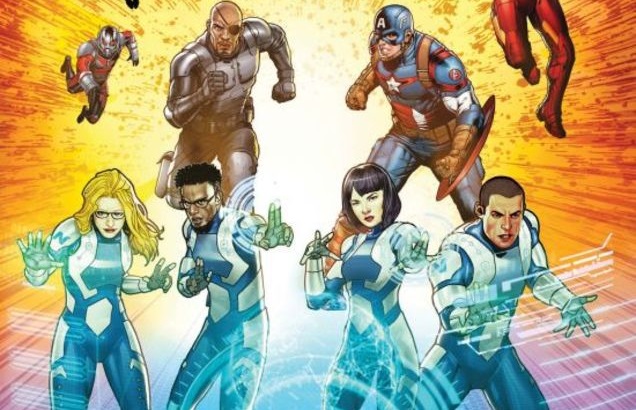 Marvel went full-on military-industrial-entertainment complex with their latest partnership, “join[ing] forces” with arms manufacturer Northrop Grumman to create an all-ages superhero comic promoting the company. The comic, titled Avengers, Featuring N.G.E.N. – Start Your N.G.E.N.S!, follows a “cutting edge, hi-tech adventure” that unites the Avengers and the Northrop Grumman Elite Nexus (N.G.E.N). This might sound like a parody comic someone would invent to mock Marvel, but no – it’s real.

Northrop Grumman is the fifth-largest defense contractor in the world, as of 2015 financials. They produce stealth bombers and other military aircraft, as well as command, security, and radar systems for projects like the U.S. Air Force’s ballistic missile launchers. Back in 2013, USA Today named it one of the 10 companies profiting the most from war.

Fans and critics rightly blasted Marvel for the partnership after they advertised a New York Comic-Con (NYCC) event with Northrop Grumman.

Guys, it’s literally a recruitment tool for kids to make them want to join the military industrial complex. pic.twitter.com/yoDDDJYWIe

Everyone at Marvel should be asking themselves how comfortable they are with this existing. pic.twitter.com/nyv4ltgHrF

This sucks and is a super disturbing partnership. You’re partnering with war mongering weapon merchants that are villains in your movies.

In response to the outrage, Marvel promptly cancelled the event.

This event has been canceled.

Marvel has also pulled the free Avengers, Featuring N.G.E.N. – Start Your N.G.E.N.S! digital comic from their site, and given that the event at NYCC was cancelled, I’m assuming they also won’t be giving out free physical copies of the book anymore.

In a statement to Polgyon, Marvel tried to explain themselves: “The activation with Northrop Grumman at New York Comic Con was meant to focus on aerospace technology and exploration in a positive way. However, as the spirit of that intent has not come across, we will not be proceeding with this partnership including this weekend’s event programming. Marvel and Northrop Grumman continue to be committed to elevating, and introducing, STEM to a broad audience.”

But this is hardly Marvel’s first queasy alliance with the U.S. military. From the start, comics’ relationship to the military-industrial complex has been…complicated. (The U.S. Army has even launched its own line of comics.) From Captain America punching Hitler, a real-life enemy of the U.S. armed forces, to Thor traveling to Vietnam to expose the “evils of Communism,” Marvel is no stranger to beefing up the U.S. military in its storylines. And even where the real-life targets feel obviously evil (i.e. Nazis), this sort of storyline places our very grey moral reality in the black-and-white, good-versus-evil world of comics. It invites a simplistic reading of real-world politics, and it suggests that the United States is motivated by some sort of innate heroism – instead of the less idealistic will to survive and thrive that drives all countries’ foreign policy.

Of course, modern comics are usually more skeptical of the U.S. government and military than those early storylines. But looked at with a more cynical eye, superhero comics’ emphasis on force and weapons engineering has always offered a covert justification for military interventionism. Superheroes ensure justice through the use of force, just as the military claims to, and most caped heroes become heroes because their tactics succeed where diplomacy, negotiation, and social pressures fail.

However, there’s still a difference between the implied values of an escapist story and the outright advertisement of a weapons manufacturer to children. It’s fair to suggest that, in the wake of this partnership, Marvel fans could look more closely at the stories they read. But it’s also fair for those fans to say this is a step too far – particularly since this partnership promotes a private corporation which stands to directly profit from warfare. Promoting that company to an “all-ages” audience – an audience who can’t be expected to understand the military-industrial complex, or to differentiate between their fictional heroes and a real-life defense contractor who’s drawn fighting alongside them – is pretty damn insidious.

As always, thanks to activist fans for keeping up the pressure.

(Via io9, Motherboard, Polgyon, and ComicBook.com; image via Marvel Comics)