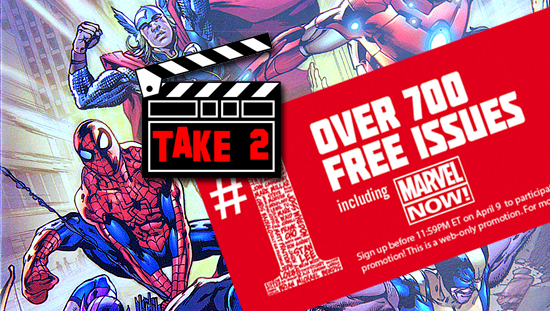 We got mad psyched a few weeks ago when Marvel tried to offer free digital downloads of 700 titles from their current and past runs. Well, the giveaway didn’t quite work. The servers were overwhelmed by the surge and everything slogged to a halt because, hey, free stuff. Now it’s take two: Marvel’s trying again to hook you with the offer of up to 700 first-issue downloads, but rather than making it a crazy free-for-all, fans need to sign up on ComiXology’s special promotions page — assuming they can keep that page working. Oh, and you’ve got less than two days to get in on this.

The giveaway known as Marvel #1, aims to turn turn casual comic fans into a weekly reading, box at the comic shop (or y’know Coimxology subscription-having) Marvel Universe fanatics. It’s a fine idea, of course, but you can be forgiven if you’re only in it to score some free digital swag. that you can read on most tablets, smart phones, and e-readers.

Now, the ComiXology site says the promotion is “available for free for a limited time,” and while they technically mean “between now and midnight tomorrow night” (11:59pm ET April 9), it has the unintentional double meaning of “if you can get the page to load.” Because it’s still not loading every time. Turns out the Venn diagram of “Internet users” and “comic book nerds” still has a pretty major overlap. Go figure.

Still, that deadline is just for the sign-up, not the actual downloads. Once you’re signed up, they’ll start sending out invites on Thursday for the payoff. So be patient and keep trying. I know I did, because hey, free stuff!