Martin Freeman Teases a New Sherlock Episode During the Hiatus, Unless He’s Messing With Us 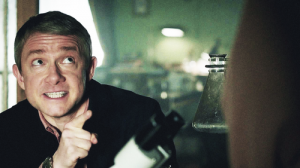 “Mark Gatiss may beat me up, but there is an idea for this one-off special that’s such a good idea, and as I was listening to it, I thought, ‘We’ve just got to do this’. And I don’t know when we are going to be able to do it, unfortunately. It’s a fantastic, really mouth-watering idea, but I really don’t know when we are going to get to do it.” — Martin Freeman, getting our hopes up about the possibility of new Sherlock (if not a full episode, maybe it’s a minisode like this one?) before season four premieres, probably in 2038 or so. Freeman also recently said he has no clue when season four will film; he thought it would be this autumn, but IDK, no one’s called him about it or anything, so who knows!