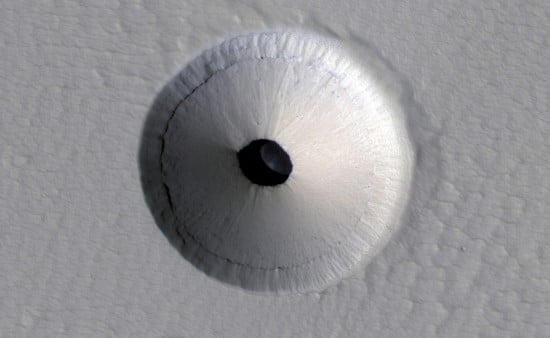 You know what’s cool? Caves. You know what’s cooler than caves? Caves on Mars. This image, captured with the HiRise camera aboard the Mars Reconnaissance Orbiter (MRO), shows a large bowl-like depression in the Martian landscape. At the apex of the depression, an entrance to a subterranean level of the planet can clearly be seen. Keep in mind that it is a false-color image, but that doesn’t make it any less striking.

The giant brains at The University of Arizona have looked at the angle of the shadow cast on the cave system below, figuring it to be some 65 feet deep and 115 feet across. Scientists are still unsure of how the depression was formed, but think that the cavity could have been a lava tube or underground river. Bits of material in the bottom of the hole suggest that material slid down it, perhaps recently or when the ceiling of the chamber collapsed. A future fly-by from the MRO will give scientists another angle on the depression, and hopefully some more data to work with.

Friends, we’ve totally found where the Maritans have been hiding for all these years. They could fool Viking and those rovers, but you can’t hide from a giant hi-res camera orbiting your planet.